Does the novel coronavirus have any s to a high-security lab in Wuhan?

Where did SARS-CoV-2 come from? Several ideas have been put forward from natural-borne in bats, an escape from a lab in Wuhan and others. Here's the murky origin story of the novel coronavirus.

Does the novel coronavirus have any s to a high-security lab in Wuhan? : Read more
Reactions: cheerios
C

admin said:
Where did SARS-CoV-2 come from? Several ideas have been put forward from natural-borne in bats, an escape from a lab in Wuhan and others. Here's the murky origin story of the novel coronavirus.

Does the novel coronavirus have any s to a high-security lab in Wuhan? : Read more
Click to expand... 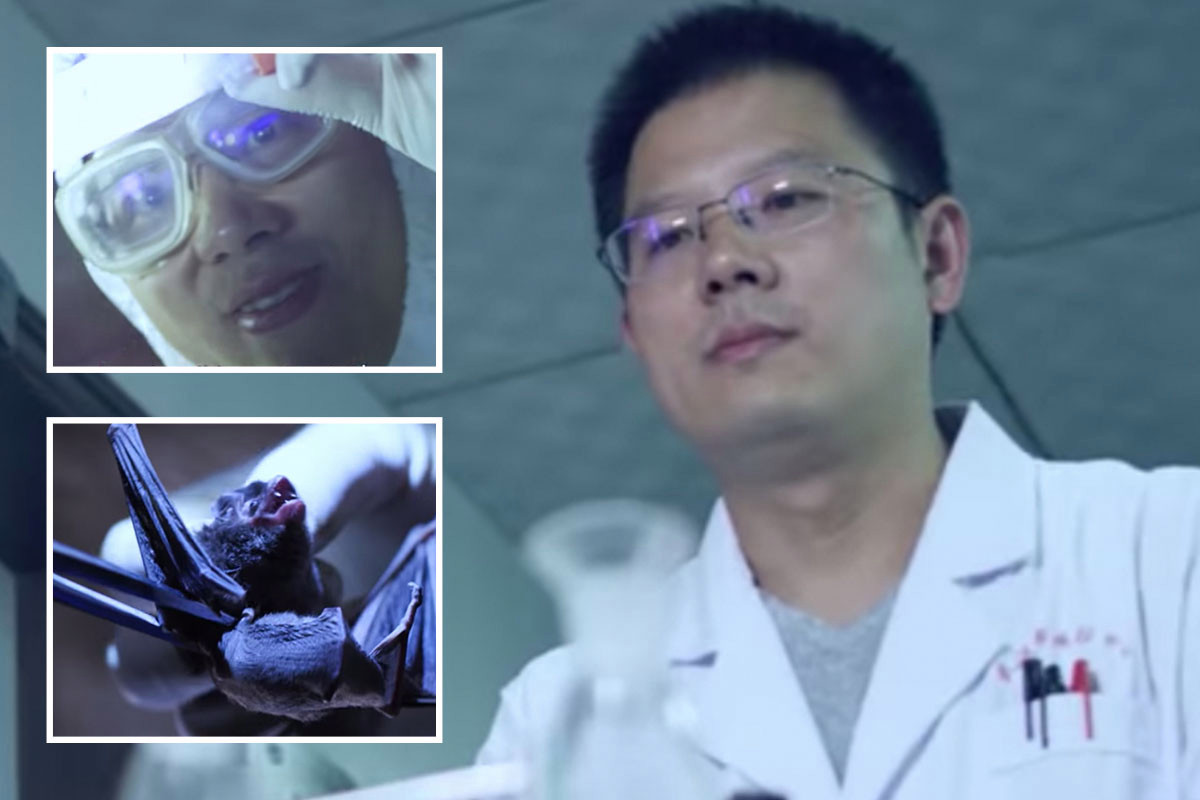 A FILM showing a Wuhan based virus expert catching bats has fuelled a conspiracy theory that the disease was man-made and leaked from a lab. The seven-minute film features the centre’s resear…

www.the-sun.com
Well oringally I found this on a different article but somehow anything posted from china disapear after he live streamed it..


My question is, is it possible for RNA synthesis modified process of 2 virus possible? Seem like along time and you wouldn't have to slice the prefect protien and insert it at the perfect site?
D

We may never know the origin of the coronavirus, but there's a good chance the Chinese do, and they've been dissembling.
Reactions: tsk8 and voiceofreason01

So nice to read an article like this. Simply laying out information in an understandable way. I was pretty sure I wasn't going to get this kind of straight talk from the Washington press corps. And I was right.

Best article yet. The article clearly illustrates how the bat lady of Wuhan would have been able to gain the virus without making it look like gene manipulation. We need to get into those labs. That is the CDC needs full access to the level 2 and level 4 labs in Wuhan. We need to look at the bats they where using and what experiments they were up to. The CCP's Document 3 (the CCP playbook on hiding this virus from the world) commanded all researches to destroy the original blood work I am sure the CCP is currently "cleansing" the labs. What is the CCP afraid of? Well that's becoming more obvious everyday. Don't buy anything from china and don't let your 401k or pension fund invest in china. The ccp has got to go!!!!!!!!!
Reactions: tsk8

Incidentally, there is an article out that links bats from caves in Yunan province to the Wuhan lab. 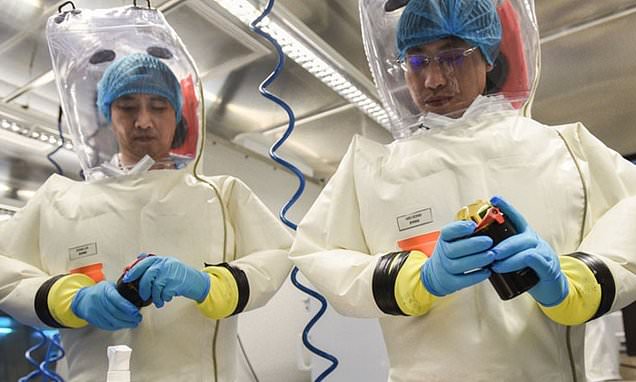 Wuhan lab was performing experiments on bats from coronavirus caves

The Wuhan Institute of Virology (scientists pictured) did experiments on bats captured more in Yunnan. Sequencing of the Covid-19 genome has traced it to bats found in Yunnan's caves.

Problem is, the earliest confirmed case was dated to December 1st and was far away from the actual labs (https://www.thelancet.com/journals/lancet/article/PIIS0140-6736(20)30183-5/fulltext ). The suspected patient zero, likewise, doesn't seem to be a Wuhan resident (https://www.scmp.com/news/china/society/article/3074991/coronavirus-chinas-first-confirmed-covid-19-case-traced-back ). And British geneticists trace the earliest cases to September or October, based on the mutation level between different strains (https://www.dailymail.co.uk/news/article-8231753/Coronavirus-started-spreading-early-September-not-originated-Wuhan.html )

So the labs are a red herring. If you want to blame the Chinese, check out the Caixin-Nikkei article (https://asia.nikkei.com/Spotlight/Caixin/In-Depth-How-early-coronavirus-signs-were-spotted-and-throttled ). It seems labs already picked up a novel coronavirus on December 27th, that people associated with the Shanghai government figured out something had gone terribly wrong by the 6th (and that's why Shanghai survived so well, because Shanghai health authorities were on alert even if Beijing was ostriching and Wuhan-Hubei was trying to cover it up), and that it took until the 20th before the Chinese government admitted the new coronavirus was human-to-human transmissible and the 22nd before Wuhan got shut down.

The Chinese tend to brag about their speed, but it was almost a month wasted before they got into gear. It's true that the incident was what Iain M. Banks would call an outside context problem, that few of the health authorities could even conceive of what they were in for (a highly contagious, moderately lethal pandemic pathogen), but it wasn't impossible for them to have dropped the hammer on the 14th and significantly reduced the contagion from the outbreak.
Last edited: Apr 18, 2020

My question is what in the whole fux scientists are doing working with these viruses in the first place. Is interaction between bats and humans that damn prevalent to where this is even necessary?
Reactions: voiceofreason01

MadDawg2020 said:
My question is what in the whole fux scientists are doing working with these viruses in the first place. Is interaction between bats and humans that damn prevalent to where this is even necessary?
Click to expand...

We assume that if this came from the lab, the lab knows about it. What if they didn't? It is possible that they isolated a virus that they were unaware of. A single bat specimen may have had multiple strains. These are called adventitious agents and they can contaminate cell lines and animal models without knowledge. Researchers often find contaminating viruses in their model systems that they had no idea were there.

DennyOR said:
We may never know the origin of the coronavirus, but there's a good chance the Chinese do, and they've been dissembling.
Click to expand...

The article seems to pay no credence to the fact that several research institutions have found HIV strand segments within the COVID genome. They state that there is no natural process known for this to happen. That in itself means that the COVID was a human construct (not originally, but as modified). That means it came from a lab somewhere. The question now is, whose lab? And when? And why?
Reactions: voiceofreason01

It now seems that evidence points to a lab researcher in Wuhan BSL4 lab creating this virus with 85 percent bat virus - the spike component of SARS - and possibly the immune suppression from AIDS virus.
Lab researchers from Wuhan were stealing samples from USA labs and were ejected from Canadian top BSL4 lab in Winnipeg months before this began.
Also patient zero appears to have been a young female student of the diabolical woman in charge of the Wuhan coronavirus research.
Reactions: voiceofreason01

The clear questions are 1. Why do these labs exist? 2. Why not demolish all virus labs asap, to not fluck with nature? You play with fire, you burn and deservedly so.

Severe anomalies on the john hopkins map's spread out of China and into Europe running the "out of china" theory. Looking at the official chinese numbers of infected from chinese province to province. Look up horse shoe bat as food and medicine and what regions are involved. The first known case of MERS occurred in Jordan. Horse Shoe bat is the reservoir. It could go either way. Either China gets it from Africa or Africa gets it from China here(India not excluded). But the timeline of discovery correlating with Chinese returning from Africa for new year is a bit suspicious for me. Even if it was proven conclusive that this is a strain that can only come out of china, it is short sited to ignore that the horse shoe bat reservoir occurs outside of China, having previously experienced other pandemics of Coronavirus (MERS) that originated outside of China. As far as escape from the lab. Maybe I'm Naive, but I find myself believing Zhengli when she says she's up all night worried about the potential for escape and her ability to rule it out, where executions may be possible. Poor girl.
T

Themoreyouknow said:
A lot of your info is right and close, but have you watched this:

Our Military and govt leaders must be required to read the Art of War. It explains well what China is doing. The Communists have never allayed their desire to control the world. All of the Wests good will at trying to build bridges with China by sharing information and trade is being used against us as a bunch of naive rubes.

Yes not a betting man but i would say the odds are astronomical, that a virus from a bat started at a wet market close to the Wuhan lab that was studying bat viruses . And the alarms sent about lack of safety and qualified workers in a level 4 virus lab is a no brainer . Does anyone think China would fess up it was their fault? I think this is an argument to stop all virus studies of viruses that are not in humans to begin with. Mikovits said natural evolution of this virus would take years to happen and likely we would not see it in our lifetimes .
You must log in or register to reply here.
Share:
Facebook Twitter Reddit Tumblr WhatsApp Email Link