There is an interesting lecture sponsored and held by Google that looks at the cross overs between Archeology and Geology.

We should remain open to testing these ideas by using modern science as opposed to dismissing the information because it does not fit into our current belief systems, which anyway have changed over time and continues to do so.

The presentation sets out some alternative evidence to the traditional academic view of human history - it is termed Forbidden Archaeology.

Many questions remain unanswered and it is good to explore them

I wonder if Google would sponsor such talks in todays world.

He has also lectured on his work at universities throughout the world.

A range of artifacts were found around the world some in layers of solid rock that had not been broken etc, that seem to pre date man's known timelines.

The talk sets out the various theories for and against these findings and references to legends and religious teachings.

These texts are not proofs only reference points of interest.

The Talk was interesting - that conflicting archeology can cause such opposition and cannot be openly discussed seems strange or maybe a reflection of something that undermines our humanity.

We know the understanding of archeology, chemistry, biology, physics etc which previously were proven beyond doubt by the science of previous times have changed or been upended over time ...

Some have questioned Cremo for his interest in Indian philosophy and religion and his referencing the legends and texts as points of interest about alternative timelines.

We now have evidence that the great floods of legend really happened. The city of Troy was found as were other places of legend etc... maybe other legends will be proven in their time


How true these findings are remains open to debate.

It is interesting that even some critics agreed it is well worth reading this book.

Over the past two centuries, archaeologists have found bones, footprints, and artifacts showing that people like ourselves have existed on earth for many millions of years. But many scientists have forgotten or ignored these remarkable facts. Why?

Primarily because they contradict the now dominant evolutionary views about human origins and antiquity.

According to traditional views, humans like ourselves have existed for only about 100,000 or 200,000 years, and before that there were only more primitive human ancestors.

This evolutionary paradigm, to which influential groups of scientists are deeply committed, has acted as a "knowledge filter."

And the filtering, intentional or not, has left us with a radically incomplete set of facts for building our ideas about human origins.

Recovering the complete set of facts takes us on a fascinating expedition, across five continents to various archaeological sites, some long forgotten, some the center of ongoing controversy.

On the other hand, the complete set of facts is consistent with the accounts of extreme human antiquity found in the Puranas, the historical writings of ancient India.

He is also a member of the European Association of Archaeologists (EAA). In 2004 Cremo's paper "The Later Discoveries of Boucher de Perthes at Moulin Quignon and Their Impact on the Moulin Quignon Jaw Controversy," presented at the XXth International Congress for History of Science, Liege, Belgium, was published in a conference proceedings volume of this congress, by the scientific publisher Brepols.

Cremo is the principal author of the book "Forbidden Archeology", a comprehensive historical survey of archaeological anomalies. In a review in British Journal for History of Science, Tim Murray said the book "provides the historian of archaeology with a useful compendium of case studies in the history and sociology of scientific knowledge, which can be used to foster debate within archaeology about how to describe the epistemology of one's discipline."

Cremo is particularly interested in examining the history of the archeology from the standpoint of alternative worldviews, particularly worldviews with foundations in ancient Indian thought.

Magicians of the Gods

Fingerprint of the Gods

2019 America Before: The Key to Earth’s Lost Civilization, which reached No 6 in the New York Times non-fiction bestseller list.

Prehistoric humans — perhaps Neanderthals or another lost species — occupied what is now California some 130,000 years ago, a team of scientists reported on Wednesday.

The bold and fiercely disputed claim, published in the journal Nature, is based on a study of mastodon bones discovered near San Diego.

These were the results of radiometric dating of the bones of a mastodon with traces of targeted processing, found in southern California.

Massive stones were found near the bones, presumably used as anvils and hammers for splitting bones and extracting bone marrow. Judging by the nature of the chips, the bones were processed soon after the death of the animal.

If the scientists are right, they would significantly alter our understanding of how humans spread around the planet.
The earliest widely accepted evidence of people in the Americas is less than 15,000 years old. Genetic studies strongly support the idea that those people were the ancestors of living Native Americans, arriving in North America from Asia.

If humans actually were in North America over 100,000 years earlier, they may not be related to any living group of people. Modern humans probably did not expand out of Africa until 50,000 to 80,000 years ago, recent genetic studies have shown.

If California’s first settlers weren’t modern, then they would have to have been Neanderthals or perhaps members of another extinct human lineage.

“It poses all sorts of questions,” said Thomas A. Deméré, a paleontologist at the San Diego Natural History Museum and a co-author of the new study. “Who were these people? What species were they?”

Some experts were intrigued by the research, but many archaeologists strongly criticized it, saying the evidence didn’t come close to supporting such a profound conclusion. 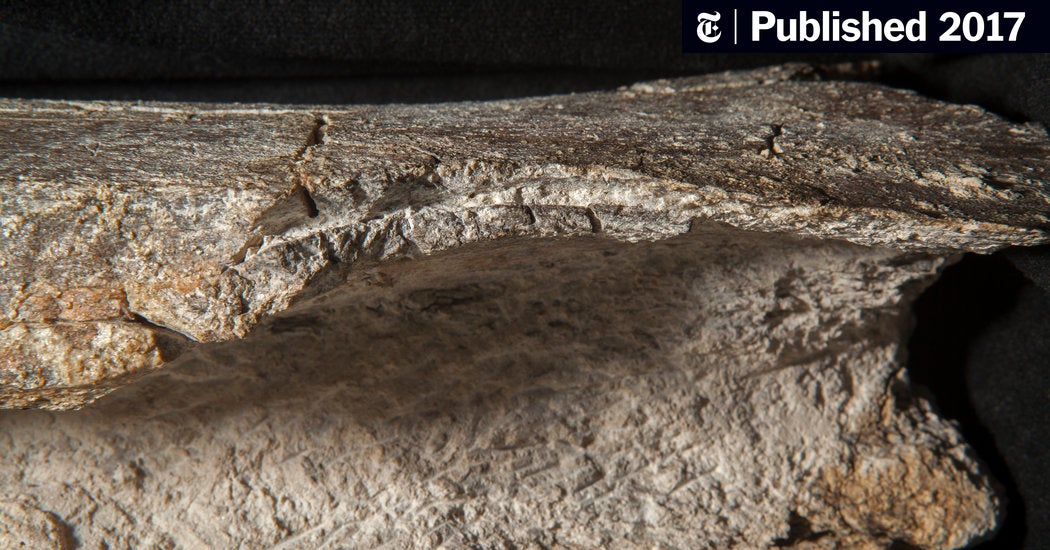 If early humans smashed mastodon bones found in California in 1992, scientists will have to rethink how humans came to the Americas.

An earlier2004 study on the east coast of the USA used Radiocarbon tests of carbonized plant remains where artifacts were unearthed last May (2003?) along the Savannah River in Allendale County by University of South Carolina archaeologist Dr. Albert Goodyear indicate that the sediments containing these artifacts are at least 50,000 years old, meaning that humans inhabited North American long before the last ice age.

Radiocarbon tests of carbonized plant remains where artifacts were unearthed last May along the Savannah River in Allendale County by University of South Carolina archaeologist Dr. Albert Goodyear indicate that the sediments containing these artifacts are at least 50,000 years old, meaning that...
www.sciencedaily.com

"I have argued that at around the end of the last Ice Age – earlier than 12,000 years ago – it is possible that a culturally advanced maritime civilisation flourished around the globe, primarily inhabiting protected coastlines close to the oceans.

This culture was then effectively wiped out by the rapid sea-level rises – which would have been experienced as a series of cataclysmic floods – that accompanied the meltdown of the vast ice sheets that had covered millions of square miles of northern Europe and North America up to a depth of three miles thick for approximately the previous 100,000 years.

For reasons that I set out in my books, I regard it as almost beyond doubt that it is vivid and terrifying memories of the end of the last Ice Age – and of no later event – that are preserved in more than 600 myths and legends from all around the world referring to super-floods that rose up to the height of mountains and that brought about the virtual extermination of mankind.

Today archaeologists are beginning to find evidence of sites of previous human occupation far out to sea, where once there was dry land. It is here that I believe the incontrovertible remains of a lost civilisation are most likely to be found. In Chapter Twelve of Heaven’s Mirror I reported the results of my preliminary investigation into the now world-famous underwater monument of Yonaguni, near Okinawa in Japan – a massive outcrop of rock with its base at a depth of 27 metres which seems to have been crafted into steps, platforms and paths. Was it made by humans or is it a freak of nature? When was it above water, when was it submerged? If it is artificial then what might it have been used for? These questions have now expanded into a new book, Underworld, covering not only the controversial underwater monuments of Japan but other underwater structures, and mysterious megalithic sites above water all across the globe."

"by providing a powerful, persuasive single-minded case for the existence of a lost civilisation, I believe that I am merely restoring a little balance and objectivity to a previously unbalanced situation.

There exists a vast array of academic “experts”, on comfortable and secure salaries, with the resources of full university departments behind them, whose life’s work is to churn out endless refinements and confirmations of the orthodox theory of prehistory.

These scholars, and their many fans and chums in the quality media, do not hesitate to mount Doberman-like attacks on any who try to argue in favour of a lost civilisation. The Dobermans also systematically ignore all forms of evidence that cast doubt on the established view (for example the implications of the astronomical alignments of the Pyramids of Giza) while at the same time accusing us “alternative historians” of being “pseudo-scientists” who dishonestly “select” only evidence that supports our case and who ignore or even misrepresent contradictory data.

Readers will have to make up their own minds about such attacks. Meanwhile my own definite feeling, in such a hostile climate, is that it’s my job – and a real responsibility to be taken seriously — to undermine and cast doubt on the orthodox theory of history in every way that I can and to make the most eloquent and persuasive case that I am capable of making for the existence of a lost civilisation.

Let the Dobermans prove me wrong, or persuade the public that I am wrong. Whatever the outcome I’m glad to have played a part in forcing an intellectual elite – historians, Egyptologists, archaeologists – to defend their previously unquestioned theories and speculations about prehistory and to confront a well-worked-out alternative theory presented to a mass public in a series of bestselling books.

The outcome is indeed uncertain. Nevertheless, the evidence that orthodox scholars ignore and misrepresent has mounted up over the years and stands quietly in the shadows, refusing to go away. Each piece forms part of a larger pattern, and that pattern begins to suggest very different origins to history than those taught to us in school. In this alternative past the civilisations of Egypt, Mesopotamia, the Indus Valley, and Pre-Columbian America might not have arisen spontaneously – almost out of nowhere – as the historians would have us believe. Instead we must consider the possibility that they could have benefited from a shared legacy of culture and knowledge handed down to them from an earlier civilisation – lost to memory – that was ancestral to them all. 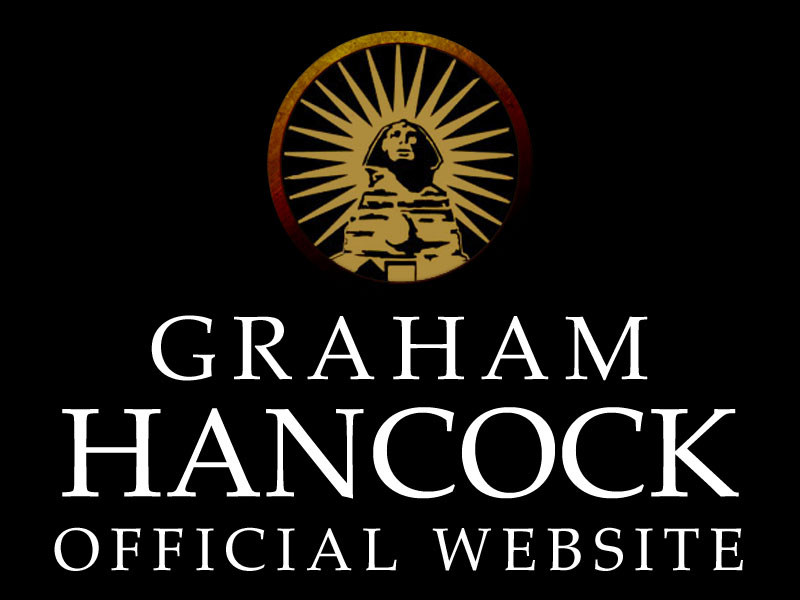 All books by Graham Hancock, from 1981 to the present.