I wanna hear your thoughts about one interesting point
What if Venus became like a second Earth?
J

I've read a few articles about the similarities between Venus and Earth. Quite often, they are called 'sisters', or 'twins'. But personally, I don't think that Venus can become like the second Earth. Acid rains, extremely high temperature (+450C), the prevalence of carbon dioxide in the atmosphere are largely determined by Venus' location in Solar System — this planet is just too close to the Sun. Only Earth was lucky to get a perfect location for the origin of life.
Reactions: bearnard1616

JacobCooper21 said:
I've read a few articles about the similarities between Venus and Earth. Quite often, they are called 'sisters', or 'twins'. But personally, I don't think that Venus can become like the second Earth. Acid rains, extremely high temperature (+450C), the prevalence of carbon dioxide in the atmosphere are largely determined by Venus' location in Solar System — this planet is just too close to the Sun. Only Earth was lucky to get a perfect location for the origin of life.
Click to expand...

Well, even if that was possible (switching orbit and the removal of H2SO4) , the atmosphere of Venus is around 91× denser than Earth's atmosphere, with other words, the air pressure is around 92 bar. Besides that Venus lacks a planetary magnetic field, has a very thin ozon-layer and worst of all: it rotates the wrong direction!
So from all the planets in our solarsystem, Mars is still the most survivable. Mars lacks a magnetosphere, so solarwinds can cause a problem.
But with a normal Moon-spacesuite, humans should be able to survive on Mars.
Reactions: Snorrie and JacobCooper21
S

Just a speculative question. Given the Earth's increasing greenhouse gasses, the increasing luminosity of the Sun, and the markedly increasing Earth's human population which is technologically based, how long will it be before Earth starts to experience Venus like warming and atmospheric changes? Basically, is our habitable zone moving beyond Earth and towards Mars?

The solar wind carries away about 1.6 million tonnes of mass every second, or 1.6 × 109 kg/s. That's a lot of material, for sure, and it adds up over long periods of time. Every 150 million years, the Sun loses roughly the mass of Earth due to the solar wind, or about 30 Earth masses over the entire lifetime of the Sun so far.

From fusion, however, the Sun loses even more mass than that. The Sun's power output is a relatively consistent 4 × 10-26 W, which means it converts approximately 4 million tonnes of mass into energy each second. From fusion, then, the Sun loses about 250% as much mass, each second, as gets carried away from the solar wind. Over the course of its 4.5 billion year lifetime, the Sun has lost about 95 Earth masses due to fusion: approximately the mass of Saturn. 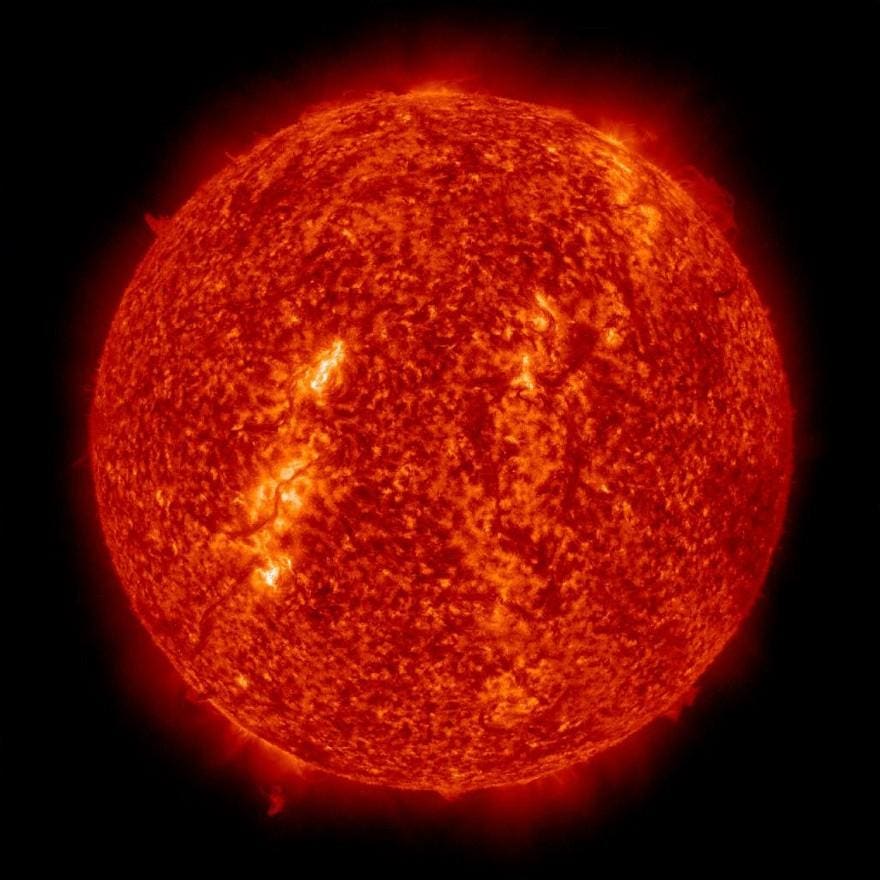 The evolution of the Sun's luminosity (red line) over time. The big increase is due to the core... [+] WIKIMEDIA COMMONS USER RJHALL, BASED ON RIBAS, IGNASI (FEBRUARY 2010) SOLAR AND STELLAR VARIABILITY: IMPACT ON EARTH AND PLANETS, PROCEEDINGS OF THE INTERNATIONAL ASTRONOMICAL UNION, IAU SYMPOSIUM, VOLUME 264, PP. 3-18

This Hertzsprung-Russell Diagram follows stars and our Sun as they move through their life's phases. Our Sun was born in a giant molecular cloud like the Pillars of Creation (A), moves through adolescence and middle age (B) on the main sequence, and it finally moves into Red giant phase (C,D, E,) as it swallows the Earth in its extended shell, then slowly drifts apart as a beautiful planetary nebula (F), leaving just a White dwarf in the center of the now slowly dissipating nebula (G). Hartmann352

As time goes on, the amount of mass lost by the Sun will increase, particularly as it enters the red giant phase of its life. But even at this relatively steady rate, the growth of helium in the Sun's core means that we will heat up here on planet Earth. After about 1-to-2 billion years, the Sun will be burning hot enough that Earth's oceans will boil away entirely, making liquid water impossible on the surface of our planet. As the Sun gets lighter and lighter, it will counterintuitively get hotter and hotter. Our planet has already used up approximately three-quarters of the time we have where Earth is habitable. As the Sun continues to lose mass, humanity and all life on Earth approaches its inevitable fate. Let's make these last billion-or-so years count.

A 10% increase in the sun's brightness will trigger the evaporation of our oceans and as the oceans evaporate, more and more water will saturate the atmosphere. This water vapor will act as a greenhouse gas, trapping even more heat and causing more and more of the oceans to evaporate, until the ground is mostly dry and the atmosphere holds the water, but at an extremely high temperature.

As the atmosphere is saturated with water, the water held in the highest parts of our atmosphere will be bombarded by high energy light from our sun, which will split apart the molecules and allow the water to escape as hydrogen and oxygen, eventually drying the Earth of water. 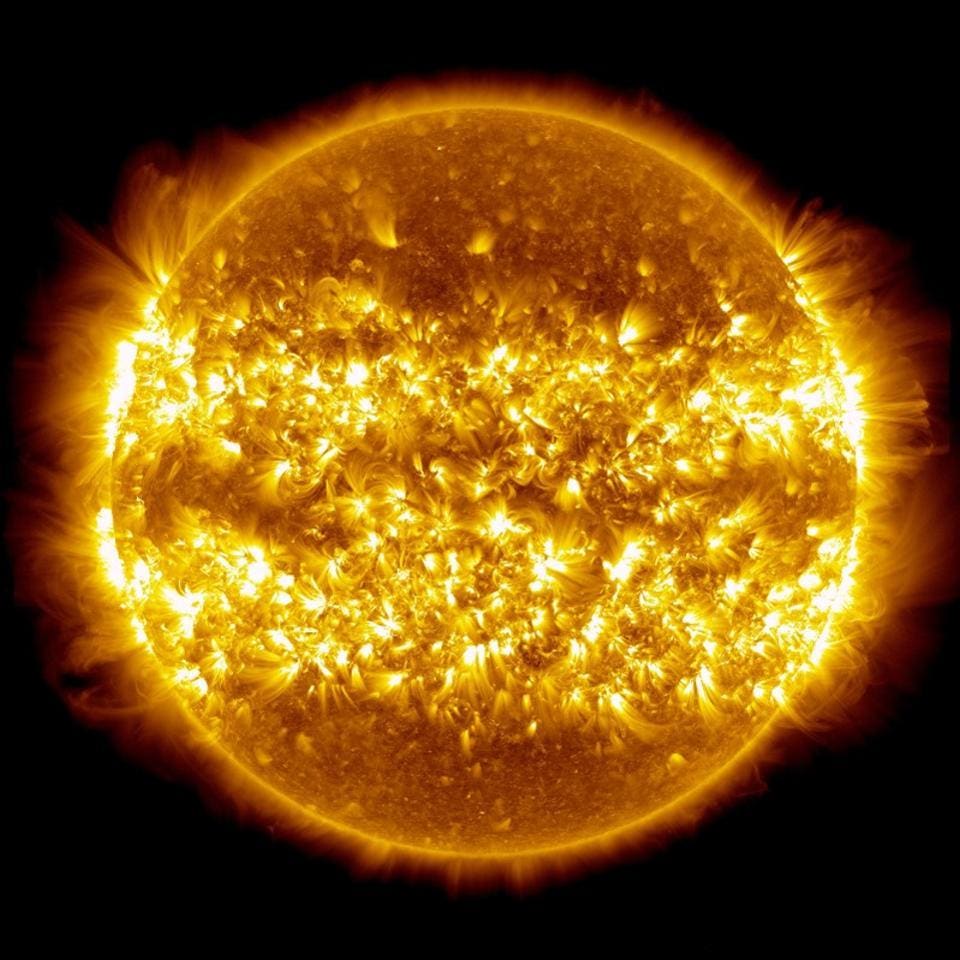 Our Sun Is Lighter Than Ever, And The Problem Is Getting Worse

Stars don't stay the same throughout their life, and the Sun is no exception. Here's what's going on.

Our sun, jolly old Mr. Sun, Sol, will never go nova or supernova, it doesn't have the mass for those kinds of explosions. But, as the sun leaves the main sequence as its mass decreases and its volume and heat increase, it will, after sufficient time, eventually make life on Earth and Mars untenable. Man, in order to survive, must have reached the stars and have become interstellar voyagers and traders. If we fail to move beyond our solar system into the stellar stream of the Carina-Sagittarius Arm, mankind will be just another failed civilization in the Milky Way Galaxy, where the grave of our solar system will be marked by a beautiful planetary nebula.
Hartmann352
Last edited: Feb 12, 2021
Reactions: Snorrie
S

The basic physics of our Sun are shown by the Hartmann352 post above; it's a good level set read. In my opinion, most complex life, and especially humanity will have much less than a billion years before extinction by climate changes and environmental degradations due to the combined effects of human produced greenhouse gasses and the natural life cycle of our Sun. (Yea, that's a very long time period, but that billion years or less will see a 10% increase in the Sun's energy output . We may have to wave "goodbye" to the habitable zone). But what do I know? Are there any measurements/models, other than politically driven hysteria, that indicate: 1. that the tail end of the habitable zone is moving toward Earth. and 2. that humans by their actions/technologies are accelerating the Sun's natural process to or beyond a tipping point? A real "double whammy". From existing speculations, that tipping point is 2050ce to 2100ce. Hence the need to "buy some time" if such is accurate. I just don't know.
You must log in or register to reply here.
Share:
Facebook Twitter Reddit Tumblr WhatsApp Email Link