Upcoming Surge In Deaths To Rival Or Exceed Last Winter?

I've created a spreadsheet that appears to accurately predict deaths in the short term based on an estimated 24 day lag time between confirmed cases and deaths.

This simple mathematical function indicates that over the course of the next month we could see a peak in deaths that rivals or exceeds the carnage from last year, even in nations with good vaccination rates such as the US and the UK.

I'm attaching plots for those nations with traces for the confirmed cases and the actual versus predicted deaths. This is no magic model. It's dirt simple and robust, with no state variables or feedback, and apparently also amazingly accurate.

I fine-tuned the lag time by evaluating the match between predicted vs actual deaths by eye. I also added two 'anchors' to better align the lag time to the early pandemic before testing became widespread when people were dying in hospital waiting rooms with zero advance notice of confirmed case. The lag time ramps up linearly from zero to maximum based on those two 'anchors'.

I'm attaching two plots each for these two nations, one with the full pandemic time series and another zoomed in from last winter's peak through today. The markers are set to the cases and predicted deaths that apply to today's prediction, so that you can see where we currently are on this trajectory.

According to my spreadsheet, this coming carnage is already baked in based upon the confirmed cases to-date. It's as if these people are already dead and just don't know it yet.

The principle unknown are how much vaccination and Omicron are improving the case fatality rate in the very short term. It is possible that a dramatic shift in the case fatality rate could perturb the predictive capability of the function. Since it relies upon the lag time of 24 days, there's a 48 day window where abrupt shifts in trends could perturb the result. News reports I've seen don't indicate that either vaccinations or the penetration of Omicron have dramatically changed the outlook in the short term. I'm expecting that this coming surge of deaths is at least partially real, and that my predictive function is keeping up with the trends. Improvement in case fatality rate over the past two years as treatments and vaccines were rolled out don't appear to have dramatically perturbed the historical performance of this predictive function. Delays in testing and reporting seem to be more of a factor, as indicated by abrupt excursions in the US data during/ following the holidays and also during/following the January 6th insurrection.

Recent deaths data in the US and the UK indicate that the uptick in deaths has already begun. This increase is clearly visible in the raw deaths data in my plots, doesn't show up in my symmetrical weighted 13 day running average deaths trace because there's a 6 day processing delay inherent in that averaging function and it's nearly a week behind this uptick. I chose that averaging function because it maximally preserves signal integrity while keeping the averaged trace time-aligned to the raw trace and also maximally flattens the weekly reporting cycle without overly suppressing detail in the traces. This allows the predictive function to closely follow the actual deaths with good fidelity and keeps the plots easily discernible while preserving as much information as possible.

I would have posted this data sooner if it was ready. I've been developing this spreadsheet since the beginning of the pandemic and it wasn't until this week that I finally got it working to the level where I felt confident in the results. I haven't seen anything similar anywhere else. The complicated epidemiological models don't provide such an accurate short-term prediction and the one at IHME isn't automatically updating. With my formula, I just download the latest data and the result is instantly available. It doesn't require any tweaking.

I'm using the Johns Hopkins Covid-19 cases/deaths time series database and the Our World In Data Covid-19 testing database. There's no mathematical magic and no super genius involved in this spreadsheet. Compared to what epidemiologists routinely do with their modeling, it's trivial. I'm amazed at how well it works. I wasn't expecting it to conform so closely to reality, but apparently when the pandemic data is good, so is the predictive capability of my spreadsheet.

I'll post updates as I improve the spreadsheet with more nations. I haven't added the two 'anchors' for other nations yet and I've recently rewritten the entire spreadsheet from scratch to clarify and simplify it. I'm hoping to eventually add it to GitHub where I'm getting my data from. My first version from nearly two years ago wasn't useful and was poorly received by the experts. Maybe now it's nearly ready for prime time?

Here’s the closest I can find online to my predictive formula. The author time-shifted cases to align with deaths.

What I’m doing is taking a ratio of that time-aligned cases and deaths data and using that ratio to predict future deaths from current cases. I’m doing the same with the number of tests performed in place of cases.

Then I’m averaging the results of the two predictive functions and tweaking the time shift for optimal alignment. I think 21 days is too short. I think the actual lag is closer to 24 based on my results. I also think my method is more useful because it automatically scales itself over time with no user intervention required. 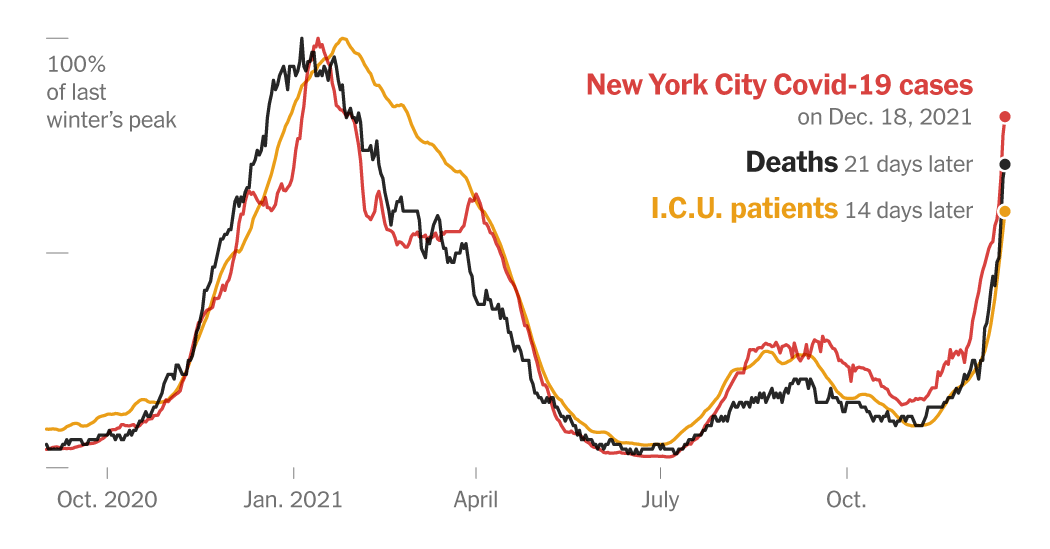 In the cities that were among the first to experience rapid rises in Covid cases due to Omicron, serious outcomes including I.C.U. stays and deaths are following case curves upward.
www.nytimes.com

So after starting this thread I noticed two things. First, apparently cases in the UK may have already peaked (plainly visible in my plots above) and the predicted deaths aren't nearly what they were last winter, only 1/4, according to my function.. Second, I just heard on KQED that 98% of cases in the US are Omicron as of today and none of the patients have required ventilators, plus the rise in cases in the US recently is so steep as to potentially upset the accuracy of my predictive function.

Maybe it's not as bad as it looks at first glance. We'll just have to wait and see...

Meanwhile, the page that drew my attention to KQED is one indicating a dramatic decrease in US lifespan that is attributed principally to Covid-19. 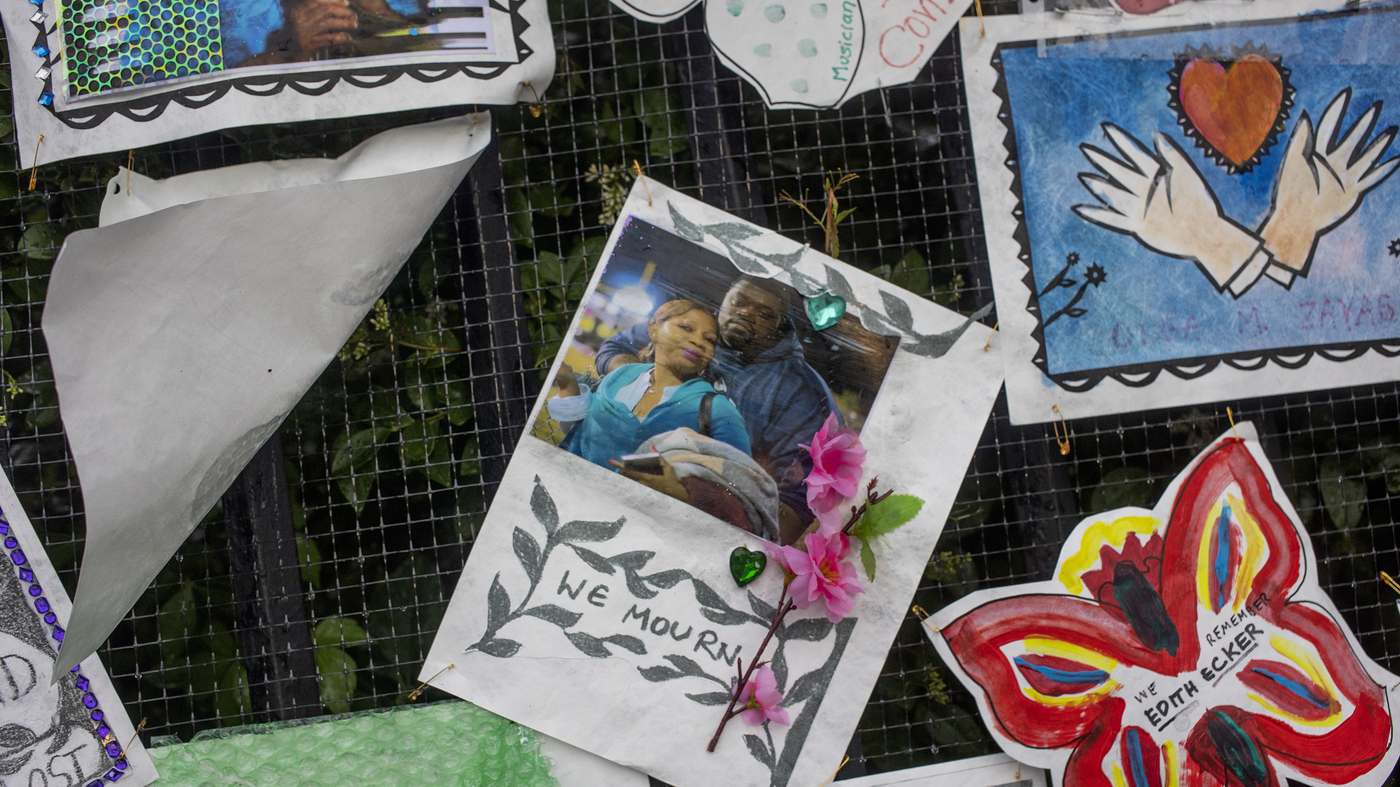 The CDC says COVID-19 was the largest factor, along with drug overdoses, homicides, diabetes and chronic liver disease. The decline was even greater for Hispanic men.

Data Dog, I have a question. How much faith do you have in the data that you are using?

Well science isn’tabout faith. The stats in the US and UK are known good, comparatively. Stats from Russia, India, etc are known to be less comprehensive.

The fact that it is possible to apply my simple formula and achieve good correlation between cases and deaths indicates at a minimum that errors are at least systematic rather than random.

I’ve been consideringIHME data too. They are further along in the analysis and modeling, and they publish plots with traces that are based on reported stats and ‘actual’ numbers that are estimated from test positivity, orders for caskets and urns, etc.

Final stats on disease always include adjustments for known inadequacies in reported cases and deaths. IHME is making these adjustments in real time to correct errors that perturb their models. It may prove beneficial for my formula too or at least make the magnitude more a reflection of reality.

The truth is that these numbers are always lacking and that’s why epidemiologists include wide margins of error in their final estimates, regardless of what aspect of health they are reporting on. Numbers are better than ever with computers and Internet so we probably have a far better grasp of facts today than we did 25 or 50 or 100 years ago.
You must log in or register to reply here.
Share:
Facebook Twitter Reddit Tumblr WhatsApp Email Link