So I have been trying to make sense of what space-time is from a practical point view. I thought of sharing with you some thoughts that came to my mind.

1). The fabric of space must be made out of the smallest wave-like phenomenon. Since this is so tiny, think of it as the smallest particle. These particles (or let's call it a field), fill the entire universe.
2). When we place a heavy particle in this field, the particle would pull this field/the fabric of space (that acts as if it a spring) in every direction towards the particle and that's based on the mass of the particle that we place in this field. This pulling force that exerts on the spring, would depend on the mass of the particle. So let's say we place three protons next to each other in this field. If so, these three protons would pull the spring towards them with an equal force (since the mass of the protons is the same), therefore, protons can’t get close to each other. Similarly, two electrons would also pull the fabric of space towards them with an equal force, even electrons can’t get closer each other. 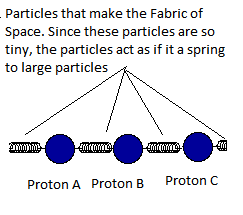 Since the mass of the proton is larger than an electron, it pulls the Fabric of Space towards it with a greater force, so for instance, it pulls the electron in a hydrogen atom. We call this the electromagnetic force.
In a helium atom, this force is large, since its nucleus is made up of a neutron and proton that has almost identical masses.

Bending of Light around a body:

“This is fundamentally what happens to light, as it travels through an expanding universe. The universe as a whole is expanding, meaning that the space between many galaxies is increasing. As light travels away from a galaxy, the Universe is continually expanding, meaning that the distance the light needs to travel is continually increasing as well. As space stretches out underneath a beam of light, its wavelength increases, and its energy decreases”
Source: https://www.forbes.com/sites/jillianscudder/2017/04/28/astroquizzical-light-energy-loss/?sh=22cdf7815768

(There’s no such a thing called space-time. It’s a mistake).

However, the fabric of space does experience a contraction or expansion depends on the particles/objects in a given location in space. The more the mass, the planet/object or a particle has, the pulling power increases, this is what causes the fabric to contract (or the particle-like phenomenon that the fabric of space is made up of
You must log in or register to reply here.
Share:
Facebook Twitter Reddit Tumblr WhatsApp Email Link