Last week, the remnants of Hurricane Ida spawned tornadoes and high winds that tore across the northeastern United States, destroying buildings and taking dozens of lives. Now, scientists have identified a key feature of big storms that could make such extreme weather events easier to predict.

When most storms form, they stay in the troposphere, the layer of the atmosphere where the majority of our planet’s weather takes place. But occasionally, they “punch up” into the stratosphere, creating mountains of clouds that trail wispy formations called above-anvil cirrus plumes (AACPs). These high-flying clouds have been linked to high winds, hailstorms, and tornadoes on the ground.

To find out why, researchers combined lightning data, radar, and severe storm warnings to build a 3D visualization of AACPs. Their model revealed that—just like winds rushing over real mountains—stratospheric winds rush over the high-level clouds as if they were solid objects. This generates powerful, downward winds and turbulent events called hydraulic jumps, they report today in Science.

These plumed storms, which can inject more than 7 tons of water per second into the normally dry stratosphere, might also have an impact on our climate, the researchers write. Because water vapor acts as a greenhouse gas once it enters the stratosphere, it could lead to warming temperatures on Earth—which would in turn spur more supercell storms. Knowing how these storms work, and when and where they occur, could improve climate models—and give advanced warning to people on the ground.

"The plume pattern in the imagery instantly tells you without the need for radar or lightning observations or other information that these are the storms you really, really need to look out for," said Kris Bedka, an atmospheric scientist at NASA's Langley Research Center in Hampton, Virginia.

The plumes have been a frequent sight over the U.S. this summer as outbreaks of severe weather have raked across the Midwest, bringing high winds, tornadoes and hail with them. 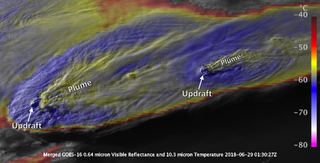 In this still image of the North Dakota storms, jet stream air collides with towering updrafts and forms U-shaped areas of cold temperatures shown in blue. The warmer plumes, which are represented by yellow tints, are visible traveling downstream. Credits: NASA

Bedka is studying the AACP phenomenon with colleagues at the University of Oklahoma. Their research is showing that compared to non-plumed storms, plumed storms are significantly more likely to produce high winds, major tornadoes and large hail. In addition, their findings could help weather forecasters provide earlier warnings of severe and tornadic storms not just in the U.S. but around the world.

There are also implications for climate.

“Plume signatures are not only useful for identifying potentially severe storms, but they also represent transport of ice and water vapor into the stratosphere," said Elisa Murillo, a graduate student at the University of Oklahoma who has collaborated extensively with Bedka on AACP research. "Water vapor is a powerful greenhouse gas, and its presence in the stratosphere has strong impacts on climate.”

To understand why the plumes are such good indicators of severe weather, it helps to understand the conditions that generate them.

Typical thunderstorms top out at the tropopause, the boundary between the troposphere — the lowest part of Earth's atmosphere — and the stratosphere. As storm-producing cumulonimbus clouds hit the tropopause their tops flatten out, giving them an anvil-like appearance.

Plumes form when intense updrafts puncture the tropopause and drag cloud tops up into the stratosphere with them. There, racing stratospheric jet-stream winds and powerful updrafts collide.

"You have wind flows exceeding 100 miles an hour at the jet-stream level running into this towering updraft," said Bedka. "So jet-stream winds are forced to go around."

As the jet-stream air collides with the updraft, it rises slightly and becomes colder, forming a U- or V-shaped area of cold temperatures. 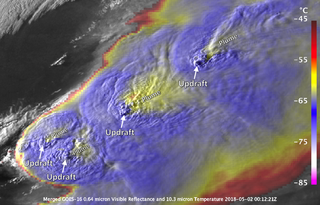 The collision between updraft and jet stream also causes a ripple effect and transports cirrus cloud ice downstream to form the plume. Plumes are typically warmer than the underlying anvil cloud because they mix with the air in the stratosphere where temperature warms with height.

Over the course of their research, Bedka and his colleagues identified hundreds of plumed storms over the U.S. using highly detailed imagery collected at one-minute intervals by the National Oceanic and Atmospheric Administration's Geostationary Operational Environmental Satellite System, specifically GOES-14 and GOES-16. They then determined when the plumes first formed, how long they lasted and when they decayed.

Next, they linked that satellite data to radar and lightning data from the same storms. They also compared the timing of plume formation to when severe weather actually occurred and when severe weather warnings were issued by the National Weather Service. What they found was significant.

"We found about 400 plume-producing storms across 13 severe weather outbreaks," said Bedka, "and in about 100 of them you had a plume appearing 10 minutes before the first warning, potentially providing additional lead time for saving lives and property."

In a few storms that lead time stretched out even further to about 30 minutes.

"Identifying this plume feature can be paired with radar observations, routinely available here in the U.S., to improve our warning capabilities," said Murillo. "In many places across the world where radar data are not as accessible, early identification of AACPs can help improve warnings and severe weather preparedness." 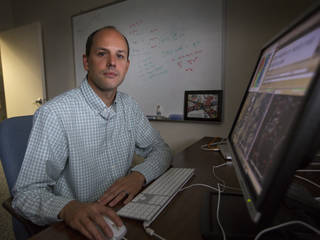 Kris Bedka, atmospheric scientist at NASA's Langley Research Center, is studying Above Anvil Cirrus Plumes with colleagues at the University of Oklahoma. Their research could improve storm warning capabilities in the U.S. and around the world. Credits: NASA/David C. Bowman

In terms of cost, storms that drop hail — often storms of the plumed variety — are the most significant.

According to the National Weather Service, hail did $1.7 billion in damage in the U.S. in 2017 — more than all the damage from lightning, tornadoes and thunderstorm winds combined.

If they're big enough, hailstones can shatter glass, dent metal, break shingles and mangle crops. A plumed storm over the Cordoba region of Argentina in February 2018 produced hailstones more than 7 inches in diameter. Hail more than 8 inches in diameter has been recorded over Nebraska and South Dakota in recent years.

Though these extreme hail events are rare, Bedka and colleagues hope their research might add a new dimension to the prediction of the severe storms that generate the most dangerous, expensive weather. They're already collaborating with other scientists to develop an algorithm to automatically detect plumes in satellite imagery.

"The combination of new satellite information such as that from GOES-16 with radar and lightning observations collected from the ground provides an unprecedented package to unravel and provide advance warning of these complex storms," said Bedka.

It appears that in 100 of 400 plume producing storms you had a plume appearing 10 minutes before the first warning, potentially providing additional lead time for saving lives and property from damaging tornadoes, wind and hail, with the latter sometimes as big as 8 inches in diameter. Hail as large as 8 inches can dent metal, smash glass, severely damage roofs, allowing additional water damage, and kill exposed livestock. Any advance satellite and radar warning will save lives and millions of dollars in damage. Our methods of detection have improved since 2018 as have the means of emergency transmission of information.
Hartmann352
You must log in or register to reply here.
Share:
Facebook Twitter Reddit Tumblr WhatsApp Email Link