“Our results with Spitzer show that the optical surveys we’ve long relied on for detecting supernovae miss up to half of the stellar explosions happening out there in the Universe,” said Dr. Ori Fox, an astronomer at the Space Telescope Science Institute. ( See: 'A Spitzer Survey for Dust-Obscured Supernovae' by Ori D. Fox, et al,
https://arxiv.org/pdf/2106.09733.pdf )

“It’s very good news that the number of supernovae we’re seeing with Spitzer is statistically consistent with theoretical predictions.”

For the study, Dr. Fox and colleagues selected a local set of 40 dust-choked galaxies, known as luminous and ultra-luminous infrared galaxies (LIRGs and ULIRGs, respectively, a partial list below).

The dust in LIRGs and ULIRGs absorbs optical light from objects like supernovae but allows infrared radiation from these same objects to pass through unobstructed for telescopes like Spitzer to detect.

The astronomers detected nine supernovae, five of which were not discovered by optical telescopic surveys.

“It’s a testament to Spitzer’s discovery potential that the telescope was able to pick up the signal of hidden supernovae from these dusty galaxies,” Dr. Fox said. 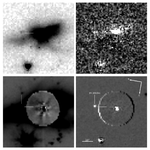 Comparison of sample data products, in this case for the first epoch of NGC 6240, used in our transient search. (Top left Original, unsubtracted MOPEX processed data. (Top right Standard alignment and subtraction of two epochs. (Bottom left Forward modeling subtraction, where the circle corresponds to our forward modeling radius. (Bottom right Subtraction of two epochs that have been forward modeled, but in this case are spaced nearly one year apart so that the telescope roll angle is similar. The colour scale and stretch is constant for all subtracted images shown in this figure. The point source is SN 2013dc. It is present in all the images, but is most clearly detected in the bottom right. The central source is the galaxy nucleus. As described in the text, there are a number of caveats for modeling the inner core, including nonlinearity concerns. Correcting those issues is beyond the scope of this paper, but we account for them in our statistics.

The types of supernovae detected by the team are known as core-collapse supernovae, involving giant stars with at least eight solar masses.

As they grow old and their cores fill with iron, the big stars can no longer produce enough energy to withstand their own gravity, and their cores collapse, suddenly and catastrophically.

The intense pressures and temperatures produced during this rapid collapse and explosion forms new chemical elements via nuclear fusion at millions of degrees F.

The collapsing stars then ultimately and suddenly rebound off their ultra-dense cores, blowing themselves to smithereens and scattering those elements throughout the interstellar medium.

The results of the study were published in the Monthly Notices of the Royal Astronomical Society.

Again, I am thrilled that the data from Spitzer is still yielding results like discovering nearly hidden supernovae in the dusty galaxies like Arp 148. I congratulate the team that found these five supernovae which were almost lost in the dust: Ori D. Fox, Harish Khandrika, David Rubin, Chadwick Casper, Gary Z. Li, Tamás Szalai, Lee Armus, Alexei V. Filippenko, Michael F. Skrutskie, Lou Strolger and Schuyler D. Van Dyk. I have always been impressed by the work and teaching of Alex Fillippenko of UC Berkeley.
Hartmann352