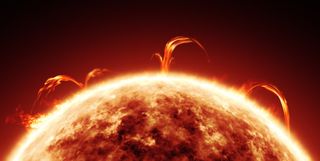 A close-up of the sun depicting solar surface activity and the corona. (Image credit: DrPixel/Getty Images)

Scientists may have discovered when and how high-energy particles that bombard Earth and other objects emerge from violent environments such as the sun's atmosphere.

These high-energy particles pose a risk to delicate satellite technology and to astronauts, and can even affect aircraft flying over the North Pole. Although researchers have been studying these particles for decades, it's been difficult to spot a clear pattern of when flare-ups can emerge and thus to predict when they might occur.

In new research, based on simulations created with supercomputers, scientists identified the plasma in the sun's outer atmosphere as the source of these high-energy particles.

"This exciting new research will allow us to better predict the origin of solar energetic particles and improve forecasting models of space weather events, a key goal of NASA and other space agencies and governments around the globe," Luca Comisso, a researcher at Columbia University and co-author of the study, said in a statement.

Related: The sun let out another flare, and the photos are stunning

The sun's outer atmosphere, the corona,  is made up of plasma*, meaning the violent conditions have stripped atoms of their electrons. Solar scientists believe high-energy particles are generated in this highly turbulent sea of stripped atoms (ions) and electrons.

This has been difficult to study, however, because plasma moves erratically and unpredictably, so it's been a mystery as to how and when high-energy particles are generated.

Comisso and Lorenzo Sironi, also of Columbia, developed simulations using supercomputers at NASA, Columbia and the National Energy Research Scientific Computing Center that modeled the exact movement of electrons and ions in the solar plasma. This created a good proxy for the corona granting the most exhaustive data yet on when and how high-energy particles form in the region.

The simulations demonstrated that magnetic fields in the corona can accelerate electrons and ions to nearly the speed of light, launching them into space.

The research helps solve a question pondered by scientists since 1949, when Enrico Fermi first began to investigate magnetic fields in space as the source of high-energy particles observed bombarding Earth's atmosphere. Fermi's work led physicists to suggest that the sun's plasma could be behind many of these particles, with others pelted at Earth from deep space. But proving this hypothesis has been challenging.

While the team's results were based on a simulation, NASA's Parker Solar Probe could help further validate the research, Comisso said.

has been observing our star since the spacecraft's launch in 2018. Part of the mission is to study the turbulent outer atmosphere of the sun. This means the Parker Solar Probe could directly observe the distribution of high-energy particles that are generated in the corona.

The results of the new work also have implications beyond the solar system. All stars are composed primarily of plasma, meaning the vast majority of matter that astronomers see is in this state of matter (which is not a gas, a liquid or a solid).

A better understanding of how plasma accelerates particles could explain high-energy particles seen not just around the sun and other stars but also around other cosmic objects, like neutron stars and black holes.

That opens the door to further simulations that could look at how distant stars, black holes and neutron stars generate their own high-energy particles.

"Our results center on the sun but can also be seen as a starting point to better understanding how high-energy particles are produced in more distant stars and around black holes," Comisso said.

The team's research was published Sept. 13 in The Astrophysical Journal Letters.

It is interesting to note that modeling the Sun's plasma* will provide the basis for further studying the high energy particles are produced and accelerated to nearly the speed of light in distant stellar objects, in neutron stars and black holes. While this study is based on supercomputer simulations, perhaps NASA's Parker Solar Probe, orbiting the Sun since 2018, will help provide additional data and answers.
Hartmann352

* Plasma: is superheated matter – so hot that the electrons are ripped away from the atoms forming an ionized gas. It comprises over 99% of the visible universe. In the night sky, plasma glows in the form of stars, nebulas, and even the auroras that sometimes ripple above the north and south poles. The branch of lightning that cracks the sky is plasma, so are the neon signs along our city streets. So is our sun, the star that makes life on earth possible.

Because so much of the universe is made of plasma, its behavior and properties are of intense interest to scientists in many disciplines. Importantly, at the temperatures required for the goal of practical fusion energy, all matter is in the form of plasma. Researchers have used the properties of plasma as a charged gas to confine it with magnetic fields and to heat it to temperatures hotter than the core of the sun. Other researchers pursue plasmas for making computer chips, rocket propulsion, cleaning the environment, destroying biological hazards, healing wounds and other exciting applications.

When temperatures get to be very high, it makes sense to start thinking in terms of the energies involved rather than sticking to the kelvin scale (or Fahrenheit, ugh). At thermodynamic equilibrium, the average energy of a "degree of freedom" with temperature 𝑇T is 𝑈=12𝑘𝑇U=12kT. For instance, a monoatomic ideal gas has mean energy per particle 32𝑘𝑇32kT, for translations in three dimensions. If you have a system where the allowed energies come in lumps, like rotational and vibrational states in molecules, the mean energy per mode is zero while the temperature 𝑘𝑇kT is much less than the energy 𝐸E of the first excited state. This means that most systems have a larger heat capacity when they are hot than when they are cold, which makes reaching high temperatures challenging.
See: https://physics.stackexchange.com/questions/114120/how-hot-can-plasma-get
You must log in or register to reply here.
Share:
Facebook Twitter Reddit Tumblr WhatsApp Email Link