New Horizons
NASA's Mission to Pluto and the Kuiper Belt

Scientists on NASA's New Horizons mission team have determined multiple episodes of cryovolcanism may have created some kinds of surface structures on Pluto, the likes of which are not seen anywhere else in the solar system. Material expelled from below the surface of this distant, icy planet could have created a region of large domes and rises flanked by hills, mounds and depressions. New Horizons was NASA's mission to make the first exploration of Pluto and its system of five moons.

"The particular structures we studied are unique to Pluto, at least so far," said Kelsi Singer, New Horizons deputy project scientist from the Southwest Research Institute, Boulder, Colorado, and lead author of the paper published today in Nature Communications. "Rather than erosion or other geologic processes, cryovolcanic activity appears to have extruded large amounts of material onto Pluto's exterior and resurfaced an entire region of the hemisphere New Horizons saw up close."

Singer's team analyzed the geomorphology and composition of an area located southwest of Pluto's bright, icy "heart," Sputnik Planitia. The cryovolcanic region contains multiple large domes, ranging from 1 to 7 kilometers (about one-half to 4 miles) tall and 30 to 100 or more kilometers (about 18 to 60 miles) across, that sometimes merge to form more complex structures. Irregular interconnected hills, mounds and depressions, called hummocky terrain, cover the sides and tops of many of the larger structures. Few if any craters exist in this area, indicating it is geologically young. The largest structures in the region rival the Mauna Loa volcano in Hawaii.

Even with the addition of ammonia and other antifreeze-like components to lower the melting temperature of water ices — a process similar to the way road salt inhibits ice from forming on streets and highways — the extremely low temperatures and atmospheric pressures on Pluto rapidly freeze liquid water on its surface.

Because these are young geologic terrains and large amounts of material were required to create them, it is possible that Pluto's interior structure retained heat into the relatively recent past, enabling water-ice-rich materials to be deposited onto the surface. Cryovolcanic flows capable of creating the large structures could have occurred if the material had a toothpaste-like consistency, behaved somewhat like solid ice glaciers flow on Earth or had a frozen shell or cap with material that was still able to flow underneath.

Other geologic processes considered to create the features are unlikely, according to the team. For example, the area has significant variations in the highs and lows of the terrain that could not have been created through erosion. Singer's team also saw no evidence of extensive glacial or sublimation erosion in the hummocky terrain surrounding the largest structures.

"One of the benefits of exploring new places in the solar system is that we find things we weren't expecting," said Singer. "These giant, strange-looking cryovolcanoes observed by New Horizons are a great example of how we are expanding our knowledge of volcanic processes and geologic activity on icy worlds."

Images obtained in 2015 by the New Horizons spacecraft revealed diverse geological features populating across Pluto, including mountains, valleys, plains and glaciers. They were particularly intriguing because the frigid temperatures at Pluto's distance were expected to produce a frozen, geologically inactive world.

"This newly published work is truly landmark, showing once again how much geologic personality Pluto for such a small planet has, and how it has been incredibly active over long periods," said New Horizons Principal Investigator Alan Stern, of the Southwest Research Institute. "Even years after the flyby, these new results by Singer and coworkers show that there's much more to learn about the marvels of Pluto than we imagined before it was explored up close."

New Horizons mission scientists have determined that cryovolcanic activity most likely created unique structures on Pluto not yet seen anywhere else in the solar system. The amount of material required to create the formations suggest its interior structure retained heat at some point in its history, enabling water-ice-rich materials to build up and resurface the region through cryovolcanic processes. The surface and atmospheric hazes of Pluto are shown here in greyscale, with an artistic interpretation of how past volcanic processes may have operated superimposed in blue.
Credit: NASA/Johns Hopkins University Applied Physics Laboratory/Southwest Research Institute/Isaac Herrera/Kelsi Singer 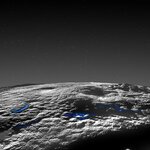 The region studied lies southwest of Pluto’s “heart,” Sputnik Planitia, and contains multiple large domes and rises up to 7 kilometers (about 4 miles) tall and 30 to 100 kilometers (18 to 60 miles) across, with interconnected hills, mounds, and depressions covering the sides and tops of many of the larger structures. Credit: NASA/Johns Hopkins University Applied Physics Laboratory/Southwest Research Institute/Isaac Herrera/Kelsi Singer

As part of their research, Kelsi Singer of the Southwest Research Institute and the New Horizons team proposed the names for two structures in the cryovolcanic region honoring aviation pioneers Bessie Coleman, the first African American and Native American woman to earn a pilot’s license, and Sally Ride, the first American woman in space. The International Astronomical Union approved the names Coleman Mons and Ride Rupes in October 2021. Coleman Mons was key to understanding this region because it may be one of the most recently formed volcanic domes. Ride Rupes is one of the tallest and longest cliffs on Pluto and indicates there may be deep faulting in the area that could allow cryolava to flow up from the subsurface. The elevation values in this region range more than 8 kilometers (nearly 5 miles) from the highest areas in red/orange to the lowest areas in pink/white. Credit: NASA/Johns Hopkins University Applied Physics Laboratory/Southwest Research Institute/Kelsi Singer

I am pleased that NASA has decided to name two newly discovered structures in the cryovolcanic region of Pluto in honor of Bessie Coleman and Sally Ride, two American pioneers in aviation. Equally important is the understanding that far from discovering a frozen world at the far end of our Solar system, an extremely dynamic dwarf planet was found. As a child reading about Pluto in my grandmother's living room on a chilly winter's night, and trying to imagine what Clyde Tombaugh's small moving dot of light was really like, I wouldn't have it any other way.
Hartmann352