One of two solar arrays on NASA’s Psyche spacecraft is successfully deployed in JPL’s storied High Bay 2 clean room. The twin arrays will power the spacecraft and its science instruments during a mission to the asteroid belt between Mars and Jupiter. Credit: NASA/JPL-Caltech Full image details

With its solar arrays installed, the spacecraft is close to its final configuration ahead of a planned August launch.
NASA’s Psyche mission is almost ready for its moment in the Sun – a 1.5-billion-mile (2.4-billion-kilometer) solar-powered journey to a mysterious, metal-rich asteroid of the same name. Twin solar arrays have been attached to the spacecraft body, unfolded lengthwise, and then restowed. This test brings the craft that much closer to completion before its August launch.

“Seeing the spacecraft fully assembled for the first time is a huge accomplishment; there’s a lot of pride,” said Brian Bone, who leads assembly, test, and launch operations for the mission at NASA’s Jet Propulsion Laboratory in Southern California. “This is the true fun part. You’re feeling it all come together. You feel the energy change and shift.” 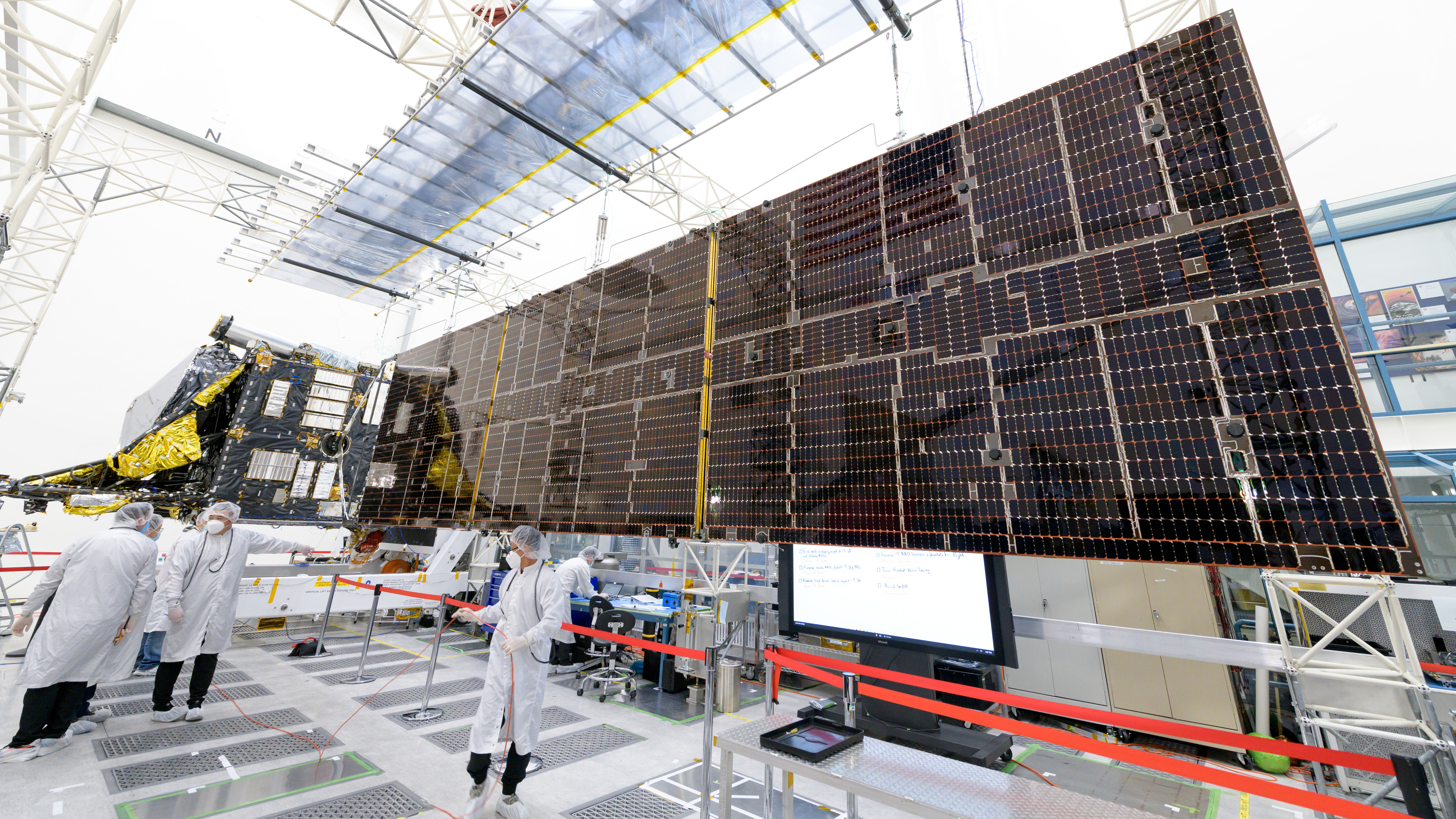 With its solar arrays installed, the spacecraft is close to its final configuration ahead of a planned August launch.

www.jpl.nasa.gov
This video shows the deployment of the three center panels on one of the 37-foot-long (11.3-meter-long) twin solar arrays on NASA’s Psyche spacecraft. Because they are so long, only one array at a time can be deployed in JPL’s High Bay 2 clean room. Credit: NASA/JPL-Caltech

At 800 square feet (75 square meters), the five-panel, cross-shaped solar arrays are the largest ever installed at JPL, which has built many spacecraft over the decades. When the arrays fully deploy in flight, the spacecraft will be about the size of a singles tennis court. After a 3 ½-year solar-powered cruise, the craft will arrive in 2026 at the asteroid Psyche, which is 173 miles (280 kilometers) at its widest point and thought to be unusually rich in metal. The spacecraft will spend nearly two years making increasingly close orbits of the asteroid to study it.

Venturing to the asteroid belt between Mars and Jupiter, far from the Sun, presents challenges for this mission, which adapted standard Earth-orbiting commercial satellite technology for use in the cold and dark of deep space. Near Earth, the solar arrays generate 21 kilowatts – enough electricity to power three or four average U.S. homes. But at Psyche, they’ll produce only about 2 kilowatts – sufficient for little more than a hair dryer.

The underlying technology isn’t much different from solar panels installed on a home, but Psyche’s are hyper-efficient, lightweight, radiation resistant, and able to provide more power with less sunlight, said Peter Lord, Psyche technical director at Maxar Technologies in Palo Alto, California, where the arrays and solar electric propulsion chassis were built. “These arrays are designed to work in low-light conditions, far away from the Sun,” he added.

After the successful installation and deployment of the three center panels inside a clean room at JPL, Psyche’s arrays were folded back against the chassis and stowed for additional spacecraft testing. The arrays will return to Maxar, which has specialized equipment to test the deployment of the two perpendicular cross panels. Later this spring, the arrays will be reunited with the spacecraft at NASA’s Kennedy Space Center in Florida and stowed for launch from Cape Canaveral.

About an hour after launch, the arrays will deploy and latch into place in a process that will take 7 ½ minutes per wing. They will then provide all the power for the journey to asteroid Psyche, as well as the power needed to operate the science instruments: a magnetometer to measure any magnetic field the asteroid may have, imagers to photograph and map its surface, and spectrometers to reveal the composition of that surface. The arrays also power the Deep Space Optical Communications technology demonstration that will test high-data-rate laser communications.

What those instruments relay to scientists will help them better understand the mysterious asteroid. One possible explanation for Psyche’s unusually high metal content is that it formed early in our solar system’s history, either as remnant core material from a planetesimal – one of the building blocks of rocky planets – or as primordial material that never melted. This mission aims to find out, and to help answer fundamental questions about Earth’s own metal core and the formation of our solar system.

Arizona State University leads the Psyche mission. JPL, which is managed for NASA by Caltech in Pasadena, California, is responsible for the mission’s overall management, system engineering, integration and test, and mission operations. Maxar is providing the high-power solar electric propulsion spacecraft chassis. Psyche was selected in 2017 as the 14th mission under NASA’s Discovery Program.

For more information about NASA’s Psyche mission go to: 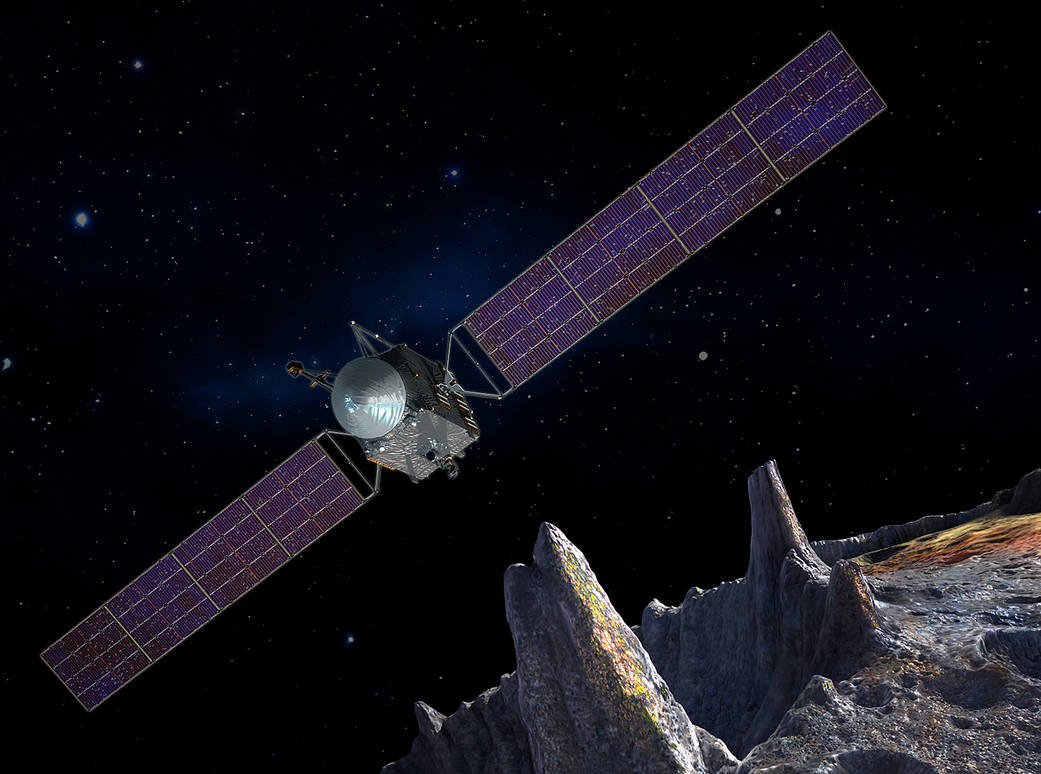 The Psyche mission will explore one of the most intriguing targets in the main asteroid belt – a giant metal asteroid, known as 16 Psyche, about three times farther away from the sun than is the Earth.

Psyche Mission | A Mission to a Metal World

The Psyche mission will explore, for the first time ever, an asteroid made not of rock or ice, but of metal. The mission will investigate planet formation.

When it comes time for NASA’s Psyche spacecraft to power itself through deep space, it’ll be more brain than brawn that does the work. Once the stuff of science fiction, the efficient and quiet power of electric propulsion will provide the force that propels the Psyche spacecraft all the way to the main asteroid belt between Mars and Jupiter. The orbiter’s target: a metal-rich asteroid also called Psyche.

The spacecraft will launch in August 2022 and travel about 1.5 billion miles (2.4 billion kilometers) over three and a half years to get to the asteroid, which scientists believe may be part of the core of a planetesimal, the building block of an early rocky planet. Once in orbit, the mission team will use the payload of science instruments to investigate what this unique target can reveal about the formation of rocky planets like Earth.

The spacecraft will rely on the large chemical rocket engines of the Falcon Heavy launch vehicle to blast off the launchpad and to escape Earth’s gravity. But the rest of the journey, once Psyche separates from the launch vehicle, will rely on solar electric propulsion. This form of propulsion starts with large solar arrays that convert sunlight into electricity, providing the power source for the spacecraft’s thrusters. They’re known as Hall thrusters, and the Psyche spacecraft will be the first to use them beyond the orbit of our Moon.

At left, xenon plasma emits a blue glow from an electric Hall thruster identical to those that will propel NASA's Psyche spacecraft to the main asteroid belt. On the right is a similar non-operating thruster. Credit: NASA/JPL-Caltech

For propellant, Psyche will carry tanks full of xenon, the same neutral gas used in car headlights and plasma TVs. The spacecraft’s four thrusters will use electromagnetic fields to accelerate and expel charged atoms, or ions, of that xenon. As those ions are expelled, they create thrust that gently propels Psyche through space, emitting blue beams of ionized xenon.

In fact, the thrust is so gentle, it exerts about the same amount of pressure you’d feel holding three quarters in your hand. But it’s enough to accelerate Psyche through deep space. With no atmospheric drag to hold it back, the spacecraft eventually will accelerate to speeds of up to 124,000 miles per hour (200,000 kilometers per hour) relative to Earth.

Because they’re so efficient, Psyche’s Hall thrusters could operate nearly nonstop for years without running out of fuel. Psyche will carry 2,030 pounds (922 kilograms) of xenon in its tanks; engineers estimate that the mission would burn through about 15 times that amount of propellant if it had to use traditional chemical thrusters.

The Psyche spacecraft will deploy, in over seven minutes per each side, and utilize a solar array about the size of singles tennis court to power its onboard instruments and its electric Hall thruster. The electric Hall thruster engine accelerates charged xenon ions out of its engine for thrust, which will eventually propel Psyche to some 124,000 miles an hour during its three and a half year journey of 1.5 billion miles. I will be intrigued by this mission and by the success of the propulsion system.
Hartmann352
You must log in or register to reply here.
Share:
Facebook Twitter Reddit Tumblr WhatsApp Email Link