Despite the apparent shrinkage of clouds in Jupiter's Great Red Spot, the storm itself is still going strong, new research suggests.

admin said:
Despite the apparent shrinkage of clouds in Jupiter's Great Red Spot, the storm itself is still going strong, new research suggests.

I was glad to read this report on the Great Red Spot (GRS) - likely continuing for sometime for telescope users to enjoy Viewing Jupiter at 150x or more and seeing the GRS rotate into your eyepiece field of view, especially while watching a Galilean moon transit - is very cool. It does not take long for the GRS to move towards the central meridian, about 2 hours or a bit and there goes the GRS moving across the field of view Same for those Galilean moons too.
Reactions: GeoXXX
S

When we consider space travel, we should understand that there is NO use dreaming of visiting or living on another planet, unless we can first break light speed.

Einstein has shown that you cannot exceed the speed of light of light because as you approach that speed your mass becomes infinite. See: https://www.physicsoftheuniverse.com/topics_relativity_emc2.html

Meanwhile, setting off a nuclear bomb about sixty meters behind a spacecraft and riding the blast wave to other planets was pretty thoroughly mapped out, beginning in the the post-WWII euphoria about atomic weapons and their use for peaceful purposes, like the exploration of space.

At least that was the thinking behind a research effort to power US spacecraft with atomic bombs, known as Project Orion.

The plan was the brainchild of mathematician Stanisław Ulam, at the Los Alamos National Labratory in 1946. He worked with noted physicist and eventual Nobel Prize-winner Frederick Reines on developing the preliminary calculations on how it could work.

The attraction was that a nuclear drive could deliver two things at once — thrust and efficiency. Many spacecraft propulsion systems can manage one or the other. Nuclear engines are the only technology that could meet the power requirements to achieve both at the same time.

For example, a traditional chemical rocket — like the Saturn V which took Neil Armstrong and his crew to the Moon — is extremely inefficient but is capable of tremendous thrust. An ion engine, on the other hand, like those that nudge satellites into the right orbit, can’t manage much thrust but is capable of efficiencies as high as eighty percent.

Ulam and Reines’ designs were formalised in a memo in 1947, and Ulam worked with Cornelius Everett to put together a report in 1955 titled ‘On a Method of Propulsion of Projectiles by Means of External Nuclear Explosions’.

Originally the plan had been to detonate a series of small nuclear devices, about one per second, inside a forty-meter-wide ‘combustion chamber’, see above, with water injected to serve as a propellant.

In their report, however, Ulam and Everett ditched the combustion chamber entirely. In its place, they designed a system that ejected nuclear bombs from the rear of the rocket followed by discs of solid propellant. The explosion of the bomb would vaporize the disc, and the resulting plasma would push against a plate — propelling the rocket upward.

Because the explosion would be outside the craft, no attempt would be needed to contain the explosions allowing much higher-power bombs to be used.

Ulam’s superiors okayed the proposal, and in 1958 it was handed to physicist Ted Taylor at the newly-created nuclear contractor General Atomics*. He called up a friend, Freeman Dyson**, to help him build it.

Between the pair, they worked on refining the design further. Taylor*** was an expert at making small atomic bombs, and he was familiar with the techniques necessary to shape an explosion, directing its force in one direction. He kept Ulam’s pusher-plate, but moved the propellant into a single unit with the bomb.

He also added a shock absorber between the plate and the vehicle — otherwise the acceleration for anyone inside when the thrust began would have been intolerable. The energy was stored in shock absorbers and slowly released to the vehicle, allowing it to accelerate more gradually.

Taylor and Dyson built a series of scale models to test their principles using conventional chemical explosives. Many were destroyed, but in 1959 a rocket propelled by six charges flew 100 metres into the air, demonstrating that the designs could yield stable flight.

Components of the Orion Spacecraft // NASA

The stakes were high. The space race was in full flow, and engineers knew that the huge Saturn V rockets were expensive, had very limited payloads and were useless for flights beyond the Moon. Project Orion promised a spaceship that was simple, rugged, spacious and cheap. 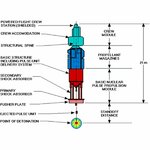 Buoyed by their initial test successes, Taylor and Dyson began to develop extravagant plans for a manned voyage throughout the solar system. “Our motto was ‘Mars by 1965, Saturn by 1970’”, Dyson later recalled. Unlike the tiny capules that housed the Apollo astronauts, they sketched out a spacecraft carrying 150 people in relative comfort. Most impressive of all was the cost — Dyson put the price of the twelve-year program at just $100 million per year — twenty times lower than the eventual cost of the Apollo program.

But their hopes were dashed by politics. The Air Force saw no military use for the technology, and NASA had made a strategic decision that the civilian space program would be non-nuclear. The general public was still wary of atomic devices, and the young NASA was gravely concerned about its image. Plus it was filled with engineers who’d spent their lives working on chemical rockets and saw nuclear propulsion as a threat to their livelihoods.

In 1959, Taylor and Dyson went cap-in-hand to the Air Force for funding. They were eventually granted it on the basis that a military use be found for the technology and that model flights were immediately stopped. Work continued on the designs, but Kennedy’s defense secretary Robert McNamara rejected any increase in funding for the project until a military application was named, effectively limiting it to a feasibility study.

So Taylor and Dyson went to NASA instead, as the only remaining option to keep the project alive. Their engineers had put together a ‘first generation’ design that wouldn’t have required a ground launch (and the associated fallout — both public and nuclear), which could have been boosted into space on a Saturn rocket. Many compromises had to be made to make this possible, dropping the efficiency of the design significantly.
Still, the promised benefits were huge. Several mission profiles were put together, and the one that was developed most fully would have seen eight astronauts and 100 tonnes of equipment and supplies making a 125 day round-trip to Mars. Even modern missions have a one-way travel time in the region of nine months. The cost of this endeavour was estimated at about $1.5 billion, with more than fifty percent of the cost attributed to a single Saturn launch from Earth.

The plans convinced Wernher von Braun, the German rocket engineer and chief architect of the Saturn V vehicle. However, he failed to make any headway with his superiors, due to the fear of what would happen if a Saturn V rocket carrying multiple nuclear devices exploded on the launchpad.

Finally, in August 1963, the US, USSR and the UK signed a nuclear test-ban treaty, making Project Orion illegal under international law. Work continued, under the vain hope that an exemption might be made for programs that could be proved to be peaceful. But the classified nature of the project was its downfall — no-one knew of its existence.

Eventually, in October 1964, an outline of the first generation vehicle was made public but this was too little, too late. In December 1964, both NASA and the Air Force pulled their funding for the project, while the world became distracted by the Moon landings.

Dyson came out of the project deeply jaded by his experiences. In 1965 he wrote an editorial in Science titled “Death of a Project: Research Is Stopped on a System of Space Propulsion Which Broke All The Rules of the Political Game”. He subsequently published more details of nuclear pulse drives, imagining large starships powered by fusion reactors. However, he eventually became disillusioned with the principle due to the radiation hazard associated with launching from Earth.

Other, less visionary, nuclear fission rocket proposals existed around the same time, like Project Rover, Project Pluto and NERVA, but by 1972 these had also been cancelled. The concept lay dead for thirty years, until it was briefly resurrected by NASA in 2003 as Project Prometheus. That too was cancelled in 2005, but some preliminary tests have been done on a fissile rocket called the Mini-Mag Orion. Results on that have so far been inconclusive.

A fusion, rather than fission, rocket may still hold some hope for future interstellar travel. A study named Project Daedalus was conducted between 1973 and 1978 by the British Interplanetary Society that laid out the basic shape of how a fusion rocket might work. In the late 1980s, Project Longshot was a NASA-sponsored continuation of this work, which could theoretically arrive at Alpha Centauri within 100 years.

In the 1990s, some work was done on the concept of using antimatter to catalyse nuclear reactions, which resulted in several rocket designs. But possibly the most promising candidate for human interplanetary travel is a Magneto-Inertial Fusion Driven Rocket, which uses magnetic fields to collapse large metal rings around a plasma, compressing it into a fusion state.

The fusion heats up the metal, which can then be squirted out of a nozzle at high speed. Repeating this process once a minute could propel a spacecraft at sufficient velocity to reach other planets with high efficiency, though there is still some way to go on making this happen in the lab.

One day, the dreams of Dyson, Taylor, Ulam and Reines are likely to be made reality, as there is still no solution as cheap and efficient as atomic rockets. Huge spaceships, carrying hundreds of people, may surf on the shockwaves of nuclear explosions to our colonies in another solar system.

It won’t happen by the end of this decade. But by the end of the century? I wouldn’t rule it out. Remember that the giant spacecraft, Discovery****, in the Stanley Kubrick/Arthur C. Clarke '2001: A Space Odyssey' was propelled by a gaseous nuclear fission plasma pushing it to Jupiter space...and the beyond.
Hartmann352

You are very welcome.

Happy New Year to you and yours.