Is the cosmic web a web because cosmic voids don't have access to time?

Cosmic voids don't have black holes, so is it reasonable to assume black holes are the cause of Time? Does Dark Matter have access to time?

Correlation is not causation. When the universe had no black holes, was there time?

If you believe in space-time, how can there be a void? What is in a void?

Did space come with the BB, and replace a void? How fast does light travel thru a void?
P

I'm puzzled here as to the defintion of a cosmic void. Is this just space?

pmwelec said:
I'm puzzled here as to the defintion of a cosmic void. Is this just space?
Click to expand...

A long time ago (around 13.8 billion years before now), there was no comic web. There were, of course, no galaxies and no stars. There were only the fundamental components of the universe: dark matter, hydrogen, helium and a little sprinkling of lithium just for flavor. All this stuff was as homogenous as the milk you buy at the grocery store: pretty much evenly spread throughout the nascent universe.

But there were tiny mass differences here and there. Some spots had more density. Some areas had less. And the denser locales had slightly more gravitational attraction than the less dense ones. So those heavier spots would pull on their neighbors, grow larger and develop even stronger gravity — and the process would continue over time.

Over the course of hundreds of millions of years, the rich got richer and the poor got poorer. Matter flowed into the dense pockets, where it eventually coalesced into the first stars, galaxies and clusters. That matter had to come from somewhere, so as the cosmic web grew and evolved, the voids emptied out.

Of course, the voids are not entirely empty. There are some dim, scattered dwarf galaxies floating around inside these mostly empty areas. And dark matter and some hydrogen managed to cling to life inside those empty, parched stretches. But by and large, the voids really are void. And because of this emptiness, ironically, the voids are filled with one thing: dark energy

This is the name we give to the accelerated expansion of the universe, as well as for whatever's causing it. We don't really know what dark energy is, but our best current guess is that it has something to do with the vacuum of space-time itself; where there's this vacuum, there's dark energy. So, there's dark energy in the rooms we're in right now, hanging out in all the little pockets of vacuum between and within atoms. But dark energy isn't very strong, so it's easily masked by the presence of pretty much anything else — matter, radiation, dirty socks in the laundry basket, you name it.

You don't get to experience dark energy, because your environment is too full of matter. But the voids? They're almost empty except for the virtual particles which pop in and out of existence from the vacuum energy. 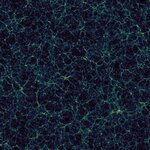 This simulated view of the large-scale structure of the universe shows the vast cosmic web of galaxies, as well as the dark, empty expanses of the cosmic voids in between.
(Image: © Nico Hamaus, Universitäts-Sternwarte München, courtesy of The Ohio State University)

There's nothing there to compete with dark energy, which means these areas are exactly where dark energy gets to play its game.


The accelerated expansion of our universe happens in the voids themselves, and these voids literally push on their surroundings, driving apart the galaxies and dissolving the great cosmic web that took billions of years to construct.

Astronomers have sampled 40,000 distant galaxies to better understand how galaxies like our own Milky Way have formed and evolved across cosmic time.

Dr David Sobral from Lancaster University is a member of an international team led by a joint collaboration between the California Institute of Technology (Caltech) and the University of California, Riverside.
The team looked at the COSMOS field (where CR7* was also discovered), a large patch of sky with deep enough data to look at galaxies very far away, and with accurate distance measurements to individual galaxies.
Dr Sobral said: "We have studied over 40 thousand galaxies and catalogued the cosmic web in large scales into its main components within the COSMOS field: clusters, filaments, and sparse regions devoid of any object. It’s remarkable how state-of-the-art data and methods now allow us to extend our analysis into a much younger universe, and probe such structures up to 8 billion years back in time.”
The galaxies were then divided into those that are central to their local environment (the centre of gravity) and those that roam around in their host environments (satellites).
The scaffolding that holds the large-scale structure of the universe constitutes galaxies, dark matter and gas (from which stars are forming), organized in complex networks known as the cosmic web.
This network comprises dense regions known as galaxy clusters and groups that are woven together through thread-like structures known as filaments. These filaments form the backbone of the cosmic web and host a large fraction of the mass in the universe, as well as sites of star formation activity.
While there is ample evidence that environments shape and direct the evolution of galaxies, it is not clear how galaxies behave in the larger, global cosmic web and in particular in the more extended environment of filaments.
Behnam Darvish a postdoctoral scholar at Caltech who is the lead author on the paper, said: “What makes this study unique is the observation of thousands of galaxies in different filaments spanning a significant fraction of the age of the Universe”.
Other authors include Nick Scoville and Shoubaneh Hemmati of Caltech, Andra Stroe of the European Southern Observatory, and Jeyhan Kartaltepe of the Rochester Institute of Technology.
The research in the Astrophysical Journal was funded by NASA.

** The Epoch of Reionization marks the first time in our cosmic history that baryonic matter (gas and stars) shaped the entire Universe around them.