Is subduction a prerequisite for the evolution of life forms ?

Maybe I am wrong, but - I feel that without subduction a planet cannot evolve.

Also - there maybe a 'pro life layer like a sub geological strata in rocky planets and some asteroids .

Mars quakes 'might' be the planet trying to subduct.

I wouldn't think so. I don't believe that life is natural and evolves, or comes from non-life. If it did, we would see it all over the universe.

But we don't. This is the only place we find it.

It's supernatural, unique to this one planet.

Of course no one considers this. Because science uses probability.

But they insist that a Creator......has zero probability.

A Designer......is the only thing that science will give a zero probability to.

How can someone that believes and uses probability.........give anything a zero?

Probability is the cheap and lazy way to accept a life of ignorance, shielded by arrogance.
Reactions: Marjorie Allworth

NASA’s InSight lander has detected two strong, clear quakes originating in a location of Mars called Cerberus Fossae – the same place where two strong quakes were seen earlier in the mission. The new quakes have magnitudes of 3.3 and 3.1; the previous quakes were magnitude 3.6 and 3.5. InSight has recorded over 500 quakes to date, but because of their clear signals, these are four of the best quake records for probing the interior of the planet.

Studying marsquakes is one way the InSight science team seeks to develop a better understanding of Mars’ mantle and core. The planet does not have tectonic plates like Earth, but it does have volcanically active regions that can cause rumbles. The March 7 and March 18 quakes add weight to the idea that Cerberus Fossae is a center of seismic activity.

“Over the course of the mission, we’ve seen two different types of marsquakes: one that is more ‘Moon-like’ and the other, more ‘Earth-like,’” said Taichi Kawamura of France’s Institut de Physique du Globe de Paris, which helped provide InSight’s seismometer and distributes its data along with the Swiss research university ETH Zurich. Earthquake waves travel more directly through the planet, while those of moonquakes tend to be very scattered; marsquakes fall somewhere in between. “Interestingly,” Kawamura continued, “all four of these larger quakes, which come from Cerberus Fossae, are ‘Earth-like.’”

Winter cold on Mars might generate "marsquakes" in much the same way. To understand how, scientists first noted that previous research suggested that liquid water might lurk right under the red planet's surface.

"There is a good evidence for past oceans on Mars,” said study lead author Michael Manga, a planetary scientist at the University of California, Berkeley. “That water may now be in aquifers."

The researchers conjectured that winter’s cold temperatures could force the top layers of this groundwater to freeze and compress any still-liquid groundwater underneath, loosening faults.

Marsquakes could also be triggered either by the gravitational pulls of Mars' two moons, or changes in atmospheric pressure from the warming or cooling of Mars' thin air by the sun.

NASA's InSight lander on Mars has detected the kind of shallow marsquakes one might expect of ice-squeezed aquifers. If Manga and his colleagues are correct, InSight may detect a pattern to marsquakes that matches the behavior of the Martian moons and atmosphere, providing evidence of deep, pressurized groundwater.

The new quakes have something else in common with InSight’s previous top seismic events, which occurred almost a full Martian year (two Earth years) ago: They occurred in the Martian northern summer. Scientists had predicted this would again be an ideal time to listen for quakes because winds would become calmer.

The seismometer, called the Seismic Experiment for Interior Structure (SEIS), is sensitive enough that, even while it is covered by a dome-shaped shield to block it from wind and keep it from getting too cold, wind still causes enough vibration to obscure some marsquakes. During the past northern winter season, InSight couldn’t detect any quakes at all.

“It’s wonderful to once again observe marsquakes after a long period of recording wind noise,” said John Clinton, a seismologist who leads InSight’s Marsquake Service at ETH Zurich. “One Martian year on, we are now much faster at characterizing seismic activity on the Red Planet.”

The verdict is still out on what causes marsquakes. Are they used by the expansion and contraction of subsurface water, the gravitational tugs of the Martian moons, Deimos and Phobos, or the dying remnants of the once rampant Mars' vulcanism? Only time, patience and the realistic data from the events will tell. Since Mars has no tectonic plates and hence, no subduction zones, did it ever support life?
Hartmann352 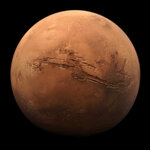