How deadly is the new coronavirus?

All estimates of coronavirus mortality should be taken with a grain of salt, but scientists are beginning to see differences based on age and access to medical care.

How deadly is the new coronavirus? : Read more

admin said:
On that cruise ship [the Diamond Princess], 707 people caught the virus and six died, for a case-fatality ratio of 0.8.
From:
How deadly is the new coronavirus? : Read more
Click to expand...

Stephanie Papas wrote a good article, unusually well balanced, with one flaw. A case-fataility ratio of 0.8 is 80%.
She probably meant 0.8%.
Or possibly 'case-fatality ratio' is a medical term that implies percentage, though general readers wouldn't know that.
A

Amphioxus, your point is undeniably True, but considering EVERY other reference to a case-fatality ratio in the article has a % sign after the digits, I am thinking your observation is somewhat trivial, putting it nicely. You referring to what is commonly known as a "typo".

All that aside, what a pity the overwhelming bulk of that which passes for "journalism" on this planet, lacks the ability to stick to facts and make only logical conclusions, and avoid sensationalistic exaggeration, in the manner of this quality article.
Last edited: Mar 9, 2020
W

For individuals with underlying conditions, the occurrence of serious, detrimental health effect is upwards of six to eight percent. e.g. Diabetes, Hyper Tension. Individuals up in age are also more vulnerable than the at-large population. That's nothing to treat casually.
A

watcher said:
For individuals with underlying conditions, the occurrence of serious, detrimental health effect is upwards of six to eight percent. e.g. Diabetes, Hyper Tension. Individuals up in age are also more vulnerable than the at-large population. That's nothing to treat casually.
Click to expand...

Watcher, I am not disputing that, but do you have a source of information for saying that? thanks

Fatalities are now at 7. In as much as it's possible to do the napkin math for cfr (probably not super accurate), that napkin number goes from 0.8% to 1% 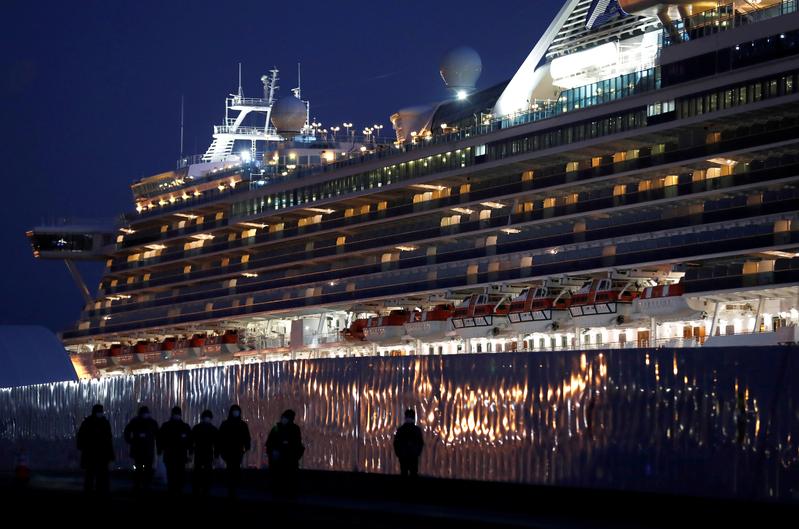 A man who had been aboard the Diamond Princess cruise ship and was infected with coronavirus has died, bringing the death toll from the ship to seven, Japanese public broadcaster NHK said on Saturday.

So many unproven assumptions and uncertainties that few seem to consider, much less care about, or report about. If you have a spreading infectious agent with a lag period of approx.14 days before symptoms show, there is no way one can accurately estimate the "number of infected" versus the number of dead. The former is uncertain, while the latter is documented. (Except in China). People only get counted as "infected" when going to the hospital with symptoms and worries. Infected people with few or no symptoms never go to the hospital. That number going to the hospital could be 1 for every 100 infected, or 10, or 1 in 1000. Nobody knows for certain, and everything about the number infected is purely hypothetical. So the percentage of people who have already died is artificially inflated due to the unknown and uncounted numbers of non-reported infected. And hence, the predictions on the percentage of who "will" die in the future therefore becomes a crap shoot.

For example, if there are 10,000 people infected, but only 100 get symptoms sufficient to go to the hospital, and out of that one person dies, then the rate is 1% by the reported sick, but it could be 0.01% of the total infected.

Add to this the uncertainties in the CoVID19 testing methods. They use PCR methods which are highly unreliable, with high rates of false positives, and many unproven assumptions. The PCR methods react to DNA and RNA fragments, not entire DNA chains, which can be from COVID19, or from any number of other antibodies from other viral exposures. All that can be said is, those who test positive share a certain percentage of infectious foreign blood proteins, bits and fragments of DNA or RNA, similar to those who perished from assumed CoVID19. "Assumed" is the key issue. The situation is so bad that Dr. Kerry Mullis, who invented the PCR method and got a Nobel Prize for it, has denounced the use of this method for diagnostic purposes.

One thing is certain, however, when the PCR tests are rolled out in a big way, so that everyone in a "risk group", or who has a cold or ordinary flu gets them, the numbers of false-positive "infected" will soar dramatically, and cause even greater hysteria and panic, without legitimate or scientifically-defendable reasons.

All the rest of the claims and "authoritative statements" about CoVid19 are mostly academic-medical posturing, in an environment where -- like with "climate change" issues -- dissenters who raise warnings as I do above, are excluded from the discussion and debates, or literally erased from professional standing, and silenced. Primarily this whole thing is being pushed by CDC and WHO "experts" who love to be in the limelight, who have patent rights on various meds used in this situation, who chase Nobel Prizes, and have strong biases towards boosting all kinds of federal and insurance money to boost up authoritarian trends in the growing medical-pharaceutical institutions. All this nonsense about "sheltering" and forbiddance of group meetings merely delays infections among the general population who will never get sick from it. That will eventually lead to a total population "herd immunity", without protection of the high risk individuals. Rational opinion argues to spend time and energy protecting the elderly high-risk groups, who are already heavily medicated and suffering from other things. But when they die, what is it actually from? Just look at the other headline at Live Science: "A New, Unidentified Virus Is Causing Pneumonia Outbreak in China, Officials Say: But what is it from?" The CoVID19 virus? Another virus? Ordinary pneumonia? Or one of the many original disease problems the patient reported, compounded by unnecessary and toxic anti-viral medications, and the fright of being isolated behind plastic with a presumed death sentence, and away from family?

Remember AZT, the toxic anti-viral that was fed to gay men and IV drug injectors at 1500 mg/day, leading to death rates of over 50% in a year, ~80% in two years? When it was discontinued, they lived longer, and this was heralded as a "breakthrough in the war against AIDS". Authentic history will rather call that an end to the epoch of AZT murder of patients by arrogant doctors who figuratively gave the middle finger to HIV critics.

Remember the infectious SMON disaster in Japan, killing nearly everyone, thought to be an infectious disease, but which turned out to be bad reacitons from coquinol drugs, an anti-diarreah medicine? Complaining of an upset stomach led many, step by step, into the grave as increasing amounts of coquinol made diarreah worse, leading to ever-more "medicine" and finally, death. One lone physician made the discovery, and was successful to announce it by Japan's much better science and medical journalism than we have in the USA, ruled as ours is by arrogance and posturing individuals.

Remember the "infectious Pellagra" epidemic of the early 1900s, thousands died in medical detention, turned out to be a deficiency of vitamin B3, from corn-based diets of rural southern poverty. Adding a bit of brewer's yeast into the diet and "infected" people recovered.

OH, didn't learn those things in medical school, or journalism school? Naturally, the medical profession has its own falsified history where much of these things are erased, except in lesser-known journals. And if you are an honest journalist and report such things, you won't be employed for long. Just look at what happens to anyone who dared to criticize the current "climate change" hysteria, being fanned by Al Gore and Greta Thunberg! Movie stars, journalists, scientists, they all get punished for daring to go against the current Madness Of Crowds.

One thing. They are counting those who have underlying medical conditions, who are elderly, who have weak immune systems, etc, among those who have died. If you remove those numbers because they died due to a previous medical condition, then the number of deaths will go down dramatically. You can't say hundreds of thousands died from the virus when the virus only exacerbated another condition. I am not saying that it didn't kill them but it was not the main reason. People need to look at the number of people who die WITHOUT any other medical condition being involved. The article said that those above 85 or 90 are at the highest risk, well yes because their bodies are weaker and have a harder time fighting disease. But the numbers of those at risk goes down the younger you get. How many young people have died? A man in a county near where I live died at the age of 40 something but had a medical condition as well.
So, in reality, how many people have actually died that did not have any other medical condition, were elderly, etc. That is what needs to be put out there.
Reactions: ani

All well and good, but fact remains if you're bad enough to get tested and be positive, the numbers are there for total cases. The WHO said the mortality rate on 3/8 was 3.4%, but that included a LOT of people with mild symptoms. With a shortage of tests (in the US anyway) and mild cases being told to stay at home and self-isolate, people getting tested now are at "Stage Four" with shortage of breath - these cases are worse than those in Feb/early March.

The "active" case mortality rate is now 5.4%, slowly rising. The "closed" case mortality rate (people will either recover or die) up from 5.7% on Mar 8 to 20%, and still rising. Other metric that's changed is how many cases are unresolved... this was about 40% on Mar 8 and is now 74% (worse cases take longer to resolve), and for whatever reason appears stable. A picture is worth 1000 words...

I suspect the answer to that is a case-by-case situation rather than a hard percentage. There are too many unknowns and un-remarked variables to generate a specific value for this question.

Well if there are any questions how bad Coronavirus is bad on people with Diabetes here is what the ADA says. https://www.diabetes.org/covid-19-faq

Using death rate can be misleading given that we don't know the real number for those infected. This is why death rates varies so much from country to country. Compare that to the Mortality Rates for each countries , regions, states.... the rates are very similar with a very small percentage margin of error.

Death Rates are great use for TAG LINES!

Bigchez1518 said:
Well if there are any questions how bad Coronavirus is bad on people with Diabetes here is what the ADA says. https://www.diabetes.org/covid-19-faq
Click to expand...

Brng to light the severity of Coronavirus on people with Diabetes is a moot point. It's trying to elicit empathy for those who are apathetic. Diabetes killed more people last year than COVID-19 will kill world wide when it is all said and done. The thought that any one needs to make a case as to danger of COVID-19 to people Diabetes shows how sad our society is.