Being a fan of Tegmark's mathematical universe I wondered if this hypothesis could be used as a supporting example of the mathematical fractal essence of spacetime geometry.

This topical review gives a comprehensive overview and assessment of recent results in Causal Dynamical Triangulations (CDT), a modern formulation of lattice gravity, whose aim is to obtain a theory of quantum gravity nonperturbatively from a scaling limit of the lattice-regularized theory. In this manifestly diffeomorphism-invariant approach one has direct, computational access to a Planckian spacetime regime, which is explored with the help of invariant quantum observables.
Click to expand...

During the last few years, there have been numerous new and important developments and insights concerning the theory’s phase structure, the roles of time, causality, diffeomorphisms and global topology, the application of renormalization group methods and new observables. We will focus on these new results, primarily in four spacetime dimensions, and discuss some of their geometric and physical implications.
Click to expand...

CDT Quantum Gravity or CDT for short denotes a nonperturbative path integral approach to quantum gravity, based on Causal Dynamical Triangulations. These represent curved, Lorentzian spacetimes and play the role of regularized lattice configurations in this prominent version of modern lattice gravity. CDT’s key idea of how to introduce causal, Lorentzian features into gravitational path integrals based on piecewise flat spaces – which up to that point had been primarily Euclidean in nature1 – while rendering them amenable to computation, dates back to 1998.
Click to expand...

From the initial formulation of this idea in two [5] and subsequently higher spacetime dimensions [6, 7] it took several years of conceptual and technical development until the first breakthrough results were obtained for the full theory in four dimensions.
Click to expand...

They demonstrated the emergence of an extended four-dimensional universe with semiclassical features on large scales in one of the phases of CDT quantum gravity [8,9], something not seen previously (and since) in models of this type. In addition, the phenomenon of dynamical dimensional reduction was revealed as a nonperturbative quantum signature of spacetime on Planckian scales [10,11], sparking numerous investigations of the spectral dimension in other approaches to quantum gravity [12].
Click to expand...

I remember being fascinated by natural crystalization spontaneously yielding the most exquisite structures.

The POM graphs in Fig. 2 show variety of fractal-grating patterns, except for Fig. 2a, which is circularly ring-banded. The fractal dimension (D) of fractals, a unit-less measure of the extent of fractals as defined earlier by Lin, et al.32 and similarly by other investigators33, could be estimated from the binary (i.e., B&W) POM images of the fractal-grating structures of PA/TA system (ESI Fig. S2); and the results of D for each fractal patterns could be obtained from the slopes of plots of ln(N(λ)/ln(λ), which is shown in ESI Fig. S3. The calculated values of the fractal dimension (D)32,33 of the fractal-grating structures for PA crystallized with different composition of the ethanol/water solution of varying volume ratios of 45/55, 50/50, 60/40, 70/30 and 80/20, respectively, were estimated as 1.824, 1.881, 1.901, 1.917 and 1.868, respectively. Within statistical confidence level, the fractal dimension of PA gratings increases slightly with the ethanol volume ratio in the co-solvent. A bigger jump of D quantity exists in PA cast from ethanol/water = 45/55 vs. 50/50, which is understandable as the fractal patterns in Fig. 2b,c (cast from ethanol/water = 45/55, 50/50, respectively) differ more significantly; however, fractals of Fig. 2c to Fig. 2f (cast from ethanol/water = 50/50, 60/40, 70/30 and 80/20, respectively) share more similarity in their grating fractal patterns. 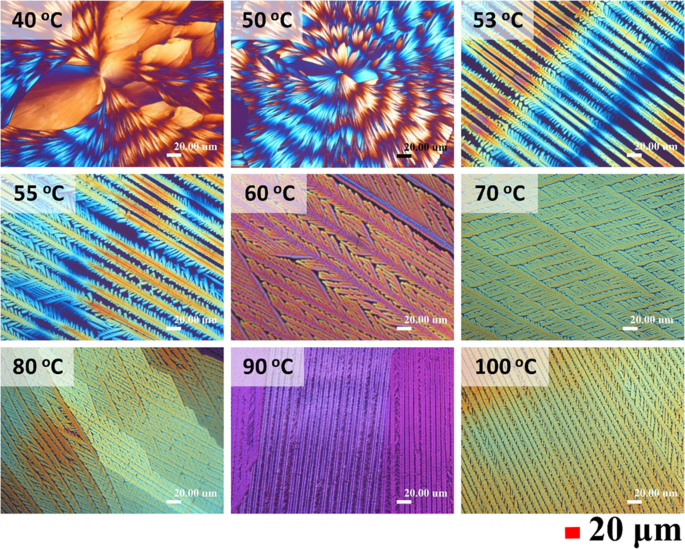 Small-molecule phthalic acid (PA), confined in micrometer thin films, was crystallized in the presence of strongly interacting tannic acid (TA) to investigate crystal assembly and correlation between banded patterns and branching structures. Several compositions of the mixture of ethanol/water...