NASA’s Space Launch System (SLS) solid rocket booster is based on three decades of knowledge and experience gained with the space shuttle booster, and improved with the latest technology.

NASA’s new rocket, the SLS, is the only rocket that can send the Orion spacecraft, astronauts, and a large cargo to the Moon on a single mission.

The boosters contribute to the power that SLS needs to launch payloads with more mass and volume to deep space than any rocket ever built. This makes it possible to send astronauts to distant destinations including Mars.

The SLS booster is the largest, most powerful solid propellant booster that will ever fly. Standing 17 stories tall and burning approximately six tons of propellant every second, each booster generates more thrust than 14 four-engine jumbo commercial airliners. Together, the SLS twin boosters provide more than 75 percent of the total SLS thrust at launch.

All booster components use steel cases repurposed from cases used on prior space shuttle flights. The five booster motors are manufactured by Northrop Grumman in Utah. The motors that include the propellant are the largest single component of each booster. They undergo a rigorous nondestructive inspection process to confirm each motor’s readiness for flight.

The other booster components are assembled in the Booster Fabrication Facility at Kennedy Space Center.
The booster forward skirt houses booster avionics that communicate with the SLS avionics to monitor booster conditions and steer the booster exhaust nozzle.

The aft skirt contains the thrust vector control system that steers the nozzle based on commands from the booster avionics. The frustum and nose cone serve as the aerodynamic fairing for the booster.

Trains transport booster motors to Kennedy where they are stacked and prepared for launch. The boosters are the first SLS element stacked on the Mobile Launcher. After stacking, each booster is mated to the SLS core stage by braces on the forward and aft booster segments.

On the launch pad, the boosters carry the entire weight of the fueled SLS launch vehicle. After launch, the boosters operate for about two minutes before separating from the core stage and landing in the Atlantic Ocean.

NASA’s Space Launch System (SLS) rocket with the Orion spacecraft atop arrived at Launch Pad 39B at the agency’s Kennedy Space Center in Florida Friday in preparation for a final test before its Artemis I Moon mission. 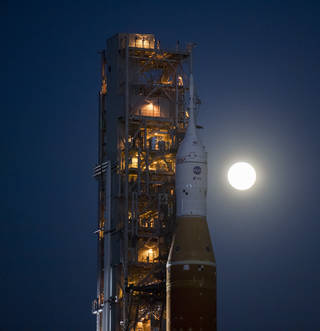 The Moon is seen rising behind NASA’s Space Launch System (SLS) rocket with the Orion spacecraft aboard atop a mobile launcher as it rolls out to Launch Complex 39B for the first time, Thursday, March 17, 2022, at NASA’s Kennedy Space Center in Florida. Ahead of NASA’s Artemis I flight test, the fully stacked and integrated SLS rocket and Orion spacecraft will undergo a wet dress rehearsal at Launch Complex 39B to verify systems and practice countdown procedures for the first launch.
Credits: NASA

The uncrewed flight test will pave the way for missions to land the first woman and first person of color on the Moon under Artemis, and the rocket rolled to the pad for a final test before launch.

“From this sacred and historical place, humanity will soon embark on a new era of exploration,” said NASA administrator Bill Nelson. “Artemis I will demonstrate NASA’s commitment and capacity to extend humanity’s presence on the Moon – and beyond.”

Stacked on the mobile launcher and mounted on the crawler-transporter for a journey from the Vehicle Assembly Building to Launch Pad 39B, it took 10-hours and 28 minutes for SLS and Orion to reach the launch pad four miles away. The trip began at 5:47 p.m. Thursday, March 17, and the 322-foot tall, 3.5-million-pound rocket and spacecraft arrived at the pad at 4:15 a.m. on March 18.

The upcoming final test, known as the wet dress rehearsal, will run the Artemis I launch team through operations to load propellant into the rocket’s tanks, conduct a full launch countdown, demonstrate the ability to recycle the countdown clock, and also drain the tanks to practice the timelines and procedures the team will use for launch.

“Rolling out of the Vehicle Assembly Building is an iconic moment for this rocket and spacecraft, and this is a key milestone for NASA,” said Tom Whitmeyer, deputy associate administrator for Common Exploration Systems Development at NASA Headquarters in Washington. “Now at the pad for the first time, we will use the integrated systems to practice the launch countdown and load the rocket with the propellants it needs to send Orion on a lunar journey in preparation for launch.”

NASA’s Space Launch System (SLS) rocket with the Orion spacecraft aboard is seen illuminated by spotlights atop a mobile launcher at Launch Complex 39B, Friday, March 18, 2022, after being rolled out to the launch pad for the first time at NASA’s Kennedy Space Center in Florida. Ahead of NASA’s Artemis I flight test, the fully stacked and integrated SLS rocket and Orion spacecraft will undergo a wet dress rehearsal at Launch Complex 39B to verify systems and practice countdown procedures for the first launch. Credits: NASA

A team of NASA and Northrop Grumman engineers fired a 2-foot-diameter, subscale solid rocket booster on Dec. 2, 2021, at NASA’s Marshall Space Flight Center in Huntsville, Alabama. This test, conducted in Marshall’s East Test Area, was the second of three tests supporting the Booster Obsolescence and Life Extension (BOLE) program, which will have an upgraded design to power the evolved configuration of the Space Launch System (SLS) rocket on flights after Artemis VIII.

A team of NASA and Northrop Grumman engineers fired a 2-foot-diameter, subscale solid rocket booster on Dec. 2, 2021, at NASA’s Marshall Space Flight Center in Huntsville, Alabama. This test, conducted in Marshall’s East Test Area, was the second of three tests supporting the Booster Obsolescence and Life Extension (BOLE) program, which will have an upgraded design to power the evolved configuration of the Space Launch System (SLS) rocket on flights after Artemis VIII.

The BOLE booster will be a larger and more powerful solid rocket motor than the current SLS solid rocket booster. The boosters for the first eight flights of the Artemis program repurpose the steel booster cases and parts from the Space Shuttle Program with an upgraded design. The BOLE booster will implement a composite case design, replace obsolete parts with newer components, and improve the booster’s design and performance.

This test focused on the booster motors, which provide the majority of the power to launch SLS. Unlike previous subscale motor tests, this marked the first time the team could evaluate insulation and nozzle on one motor rather than two configurations, one for the nozzle and one for the insulation. During this subscale test, the motor produced 76,400 pounds of thrust.

The original test design had two segments, each 9 feet long. To get a more characteristic thrust profile, a 4.5-foot-long segment was added to the test article, totaling nearly 28 feet and making this the longest subscale motor tested to date. In addition to the added half segment, a new propellant, aft dome design, and nozzle design are included in the BOLE motor development program that will become part of the Block 2 evolved rocket.

During the test, three different internal case insulation formulations were evaluated in the aft dome. The performance results of these materials will aid in selecting a final formulation for the first full-scale test fire of the BOLE booster. As the team completes the final design for the full-scale motor, this test is an important step in learning how materials will perform at the higher pressure and performance expected for the BOLE motor as compared to current motors.

The third test of the subscale motor is currently scheduled for spring 2022 at Marshall, followed by the first full-scale BOLE motor test, tentatively scheduled for spring 2024 at Northrop Grumman’s test facility in Utah. Northrop Grumman, lead contractor for the booster, helped conduct the Marshall test and will be assisting with data evaluation.

The aft assemblies of the Artemis I boosters on the mobile launcher in the Vertical Assembly Building.

* Polybutadiene acrylonitrile , the solid propellant used in the solid rocket boosters attached to Artemis - also known as polybutadiene-acrylic acid-acrylonitrile terpolymer, is a copolymer compound used most often as a rocket propellant fuel mixed with ammonium perchlorate oxidizer. Polybutadiene acrylonitrile is used by NASA due to its simplicity, low cost, lower toxicity and is less damaging to the environment than the more common hydroxyl-terminated polybutadiene. PBAN based propellants also have a marginally higher success than HTPB based propellants, which is only marginally higher than HTPB based propellants. As far as the same curing agents were concerned, the tensile characteristics of the elastomer, which was based on the cured PBAN, were not as good as those of telechelic elastomers. The ultimate tensile strength and ultimate ductility of the PBAN elastomers were between 3-6 kg/cm and 100-40 percent, respectively.
(See: https://plex.page/Polybutadiene_acrylonitrile)

It's hard for me to grasp that these two new five segment solid rocket boosters produce 7.2 million pounds of thrust. And we also need to remember that once started, these SRB's cannot be turned off but burn until their solid fuel is exhausted. You can begin to understand the complexity of the pre-launch ritual as well as its absolute necessity. Without SRB's, the main engines can be throttled back and off on the pad. No longer, the use of the SRB has dramatically increased the thrust but has also added to the initial two minutes of danger until the SRB's are exhausted of their fuel and are jettisoned.
Hartmann352
Last edited: Mar 23, 2022

The only launch I've personally seen was the Challenger launch. And that was from miles away without any engine report. As soon as I saw the contrail split in two, I ran down off my perch and turned the tv on.