A 'CANNIBAL CME' IS APPROACHING EARTH

Strong G3-classgeomagnetic storms are possible during the early Universal Time (UT) hours of March 31st when a Cannibal Coronal Mass Ejection (CME) is expected to hit Earth's magnetic field. During such storms, naked-eye auroras can descend into the USA as far south as, e.g., Illinois and Oregon (geomagnetic latitude 50o). What is a "Cannibal CME"?

Coronal Mass Ejections (CMEs) are clouds of electrified, magnetic gas weighing billions of tons ejected from the Sun and hurled into space with speeds ranging from 12 to 1,250 miles per second (about 20 to 2,000 kilometers per second). 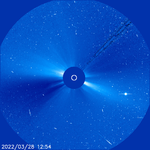 A SOHO coronagraph movie of multiple CMEs on March 28, 2022.

Yesterday, March 28th, sunspot AR2975 unleashed a frenzy of solar flares--more than 17 in all. There were 11 C-class flares and 6 M-flares. At least two full-halo CMEs emerged from the chaos.

A NOAA computer model suggests that the second CME will overtake the first, merging into a single "Cannibal CME" before striking Earth's magnetic field around 0300 UT on March 31st. Click to view the complete model:

WSA-Enlil is a large-scale, physics-based prediction model of the heliosphere, used by the Space Weather Forecast Office to provide 1-4 day advance warning of solar windstructures and Earth-directed coronal mass ejections (CMEs) that cause geomagnetic storms. Solar disturbances have long been known to disrupt communications, wreak havoc with geomagnetic systems, and to pose dangers for satellite operations.

Cannibal CMEs are fast coronal mass ejections that sweep up slower CMEs in front of them. This NASA movie shows what happens. The mish-mash contains tangled magnetic fields and compressed plasmas that can spark strong geomagnetic storms.

If the NOAA model is correct, the density of solar wind plasma around Earth could increase 10-fold when the CME arrives, while the solar wind speed will top 700 km/s. These events would set the stage for G2- to G3-classgeomagnetic storms.

North Americans should be alert for auroras after local nightfall on March 30th. For Europeans, the hours before dawn on March 31st are favored. When chasing auroras, dark skies are essential; go to the countryside. Urban glare can overwhelm auroras even during a strong geomagnetc storm. Aurora alerts: SMS Text.

Auroras occur in Earth's atmosphere when magnetized plasma particles from the sun hit Earth's magnetic field, creating a temporary magnetic havoc around the planet. In addition to providing the glowing spectacle the magnetic storms can damage satellites and knock out power grids. The worst geomagnetic storm in recorded history, the so-called Carrington Event of 1859, disabled telegraph networks all over Europe and North America.

Solar flares, filament eruptions and coronal mass ejections (CMEs) are thought to be caused by a common magnetohydrodynamic process, though not all of them are necessarily observed in the same event. Magnetic reconnection is a key energy release mechanism for flares, which are thought to be sometimes triggered by the instability of cool filaments in active regions. Recently, it has been discussed that much larger ‘superflares’ that release the energy of more than 10*33 erg (ten times the largest solar flares, ~10*32 erg) can occur—or have occurred relatively recently—even on the Sun. Superflares may produce much larger CMEs than the largest solar flares, which can severely affect the environment, habitability and development of life around young and intermediate-age stars. However, superflares on solar-type stars have been mainly detected by optical photometry (for example, the Kepler space telescope). Therefore, no observational indication of filament eruptions/CMEs has been reported for solar-type stars. Optical spectroscopic observations are a promising way to detect stellar filament eruptions, which can be indirect evidence of CMEs. However, for solar-type stars, optical spectra of superflares have never been obtained.

It is speculated that the filament eruptions/CMEs associated with superflares can severely affect planetary atmospheres. Our findings can therefore provide a proxy for the possible enormous filament eruptions on young solar-type stars and the Sun, which would enable us to evaluate the effects on the ancient, young Solar System planets and the Earth, respectively. Further, it is also speculated that stellar mass loss due to filament eruptions/CMEs can affect the evolutionary theory of stellar mass, angular momentum and luminosity, more importantly than can stellar winds. At present, frequency and statistical properties of CMEs on solar-type stars are unknown, but important insights into these factors will be obtained by increasing the number of samples in the future.

Here in NH, I am looking forward to looking forward to viewing the Northern Lights (Aurora Borealis) on the night of March 30th, soon after dark. I haven't seen the Northern Lights since I was a kid. Now, it's even more meaningful because I understand the physics behind them.
Hartmann352
You must log in or register to reply here.
Share:
Facebook Twitter Reddit Tumblr WhatsApp Email Link